Chapter Fifty One: "The Sandpaper Dolls." 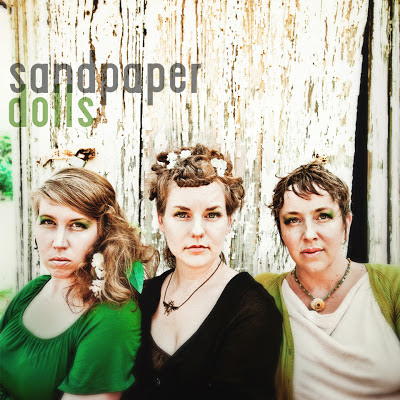 The Sandpaper Dolls debuted in Louisville in 2008, and have since floored jaws with their innovations in a cappella music. Comprised of Suki Anderson, Amber Estes and Rebecca Dennison, the trio's influences accumulate and drive through the sounds of country, folk, blues, gospel, jazz, orchestral, the conjuring of various directions in world musics, and a just plain hook into something that sounds ethereal and cosmic at times. This is a cappella music that can become a somber twist on using voices to create anything imaginable sans instrumentation. They released a live album ("Live @21C") in 2009, provided their voices on several recordings by other Louisville acts, including Yard Sale and My Morning Jacket, and have now returned with a full-length studio album recorded by Kevin Ratterman and released by Karate Body Records.

What has been hoisted from these voices onto this self-titled release is a haunting gathering of  folk-country base filtered through lyrics that sound like they are conveying ancient legends and tales partioned under the gamp of a creative and surreal voice-only presentation. A scarceness parades and umbrellas the tunes, allowing for room to absorb, breathe, intake, maybe gasp through the the rooms and scenarios the Sandpaper Dolls create. There are stories to be told, and in-between those storied lyrics there are moments of intense vocal reflections that sum and hold the fuel of the rhapsodic pondering that exists here.

Just beginning the album with the sounds of rain and creaks within the context of a song called "Betrayer and Enemy," allowing the background soundscape of scraping rust to provide a harbor for the the use of harsh breaths to eventually sink a percussion behind a celestially sad and  unnerving melody...the perfect set-up for the trail The Sandpaper Dolls will take you through.

Pieces such as "Spider" exemplify the use of the voice as instrument, combining vocal chords in various ways to synch percussion behind the beautiful melodies and harmonies that the lead voices provide. Whispers dance around hums and open gateways to imagination that may not even be accessible through strings or drums. "Colors" portrays the originality found within these women's minds, and how to take you there. This is captivating painting in words and voice that is disconcerting and calming simultaneously. "Mad Song" is a lesson in complicated harmonization that my mind really can't comprehend. "Tesla Bossa" presents that inventive nature, producing even the imitation of circuiting laboratory voltage.

As eerie as the album begins, "One Leaf" might furrow your brow with its beautiful nature that swims still in a sadness mourning time lost.

The Sandpaper Dolls have definitely produced one of the more imaginative releases of the year. The songs in themselves are interesting mergers of emotions and melodies, some pretty, some dark, some full, some empty and painful, some calming and some leaving the listener with an uncertainty about your surroundings. Throughout is the fusion of amazing melody and harmony that is produced in some of the most imaginative ways I've ever heard. Recommended.