Tropical Trash made me cut myself today.

I was listening to their new seven-inch "Fear of Suffering" while shaving. One of the sides ended unexpectedly on my record player. I jumped to run and grab the record before the needle spilled and scratched into the label hole. That jump cut my face with the razor, straight into the cheek. Blood, pain, fear of suffering.

Jim Marlowe granted me access to this latest marshy exploration of porphyrized sound Tropical Trash has delivered unto the masses (or the lesses, who knows). Everything here is juggernautish, rhythmically, aesthetically, and artistically. It's some of the best disjointed rock ever put onto rekkid. It's a tomcat, or maybe a tomcod, or a tomboy, or a tombstone to most things before and after. I'm trying to say its definitely in the running for my favorite release of 2012. 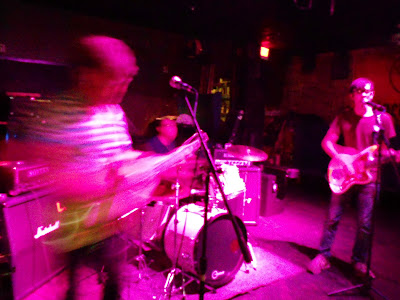 The music contained within this disc is a challenging assault on reality. The band made my listening experience confrontational from the start. My hands were shaky enough from too much coffee, too much beer from the night before. Pulling out the 45, the inner sleeve came out. I was too inept to push it back in. The white vinyl is armed with a white unlabeled label. What side do I play? What speed? Fuck it, I put it on and figured it all out. All of it. I understand everything now. It's all clear. And scary. And I think I accidentally spilled sweetened condensed milk on the right upper hand of the record's cover, unless it came like that. As I became engrossed in the music, I began to imagine that they did put a smudge of sweetened condensed milk on every cover, just to thatch people's brains a little more.

It's a mysterious recording, but I've always enjoyed the mystery a seven-inch can convey. Hearing something unsolvable ups the ante for me. Keeps things uncontrolled and darkened; makes you wonder who these people are, what they do. Are they some cult locked in a cave somewhere making these noises. Maybe. 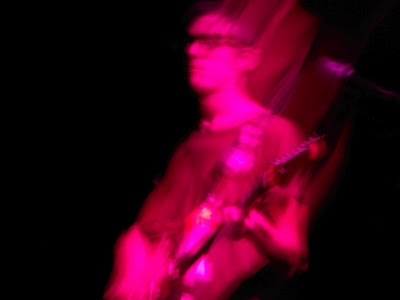 Side one is "Baltimore," and it takes up that whole side. I tried listening to it in my normal record-listening stance: sitting on couch in front of the player. Instead, I was immediately twisting large populations of hair from head, pacing the room in anxiety, wringing my hands, stasis achieved.What have they done? What are they doing? "Baltimore"'s punched lyrics drive in-between a looming bit that sticks like metal in your mouth. Guitar sounds crash into each other until suddenly entering a "jazz" phase of improv'ed noise spread that sounds as if the band is destructing its guitars at a dank anchored correctional facility somewhere under the ocean. Then it all comes back, and that strange punching lyrical assault becomes a spiritual hand to lead you through to the end.

Then side two squashes all hope. "False Crypt" starts the side off hammering your pores away with overlapped vocals and Jordan's drums careening and jolting into time travel. I think the song is - what - a minute long? You could call it "related to black metal" but that would be wrong. It's just fucking fast and loud ugly and amazing. And then before you can stop cutting your legs with the razor you kept from the bathroom, "Pentagram Ring Finger" starts making you bob your head to what I guess might be mid-tempo in the Tropical Trash Fields of Gold. 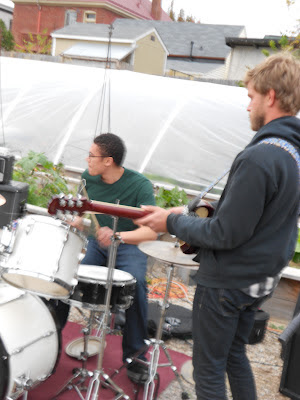 "Raw Mind" delves left with a riff that sounds like it was recorded backwards, but was not. And again, those strange lyrics. It's demise makes you think something might resolve, but you are left to hold your head and weep, digging until callouses form on the tips of the digits. Horns have shown up at this point in the recording, and I don't mean those of the devil, but rather the instruments, playing the devil's music. "Burning Ghost" ends it all with a prankful stomp forward that at points comes the closest to something resembling straight punk on the record, but it actually doesn't. 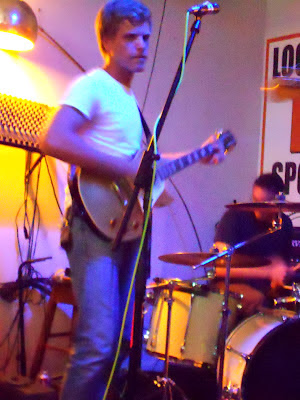 This oddly balanced, frightening seven-inch is pretty perfect in that it sort of blankets Tropical Trash's sounds, which can range in a lot of different directions. They are soldiers constructing bridges between full-blast noise quests leading into improvised sparseness that can then shoulder a variety of tempos and styles in-between. Jim, Jordan and Kirk have assembled some intense and creative rock, bolting it down with clamps to a blab board and letting it wean. Highly recommended. 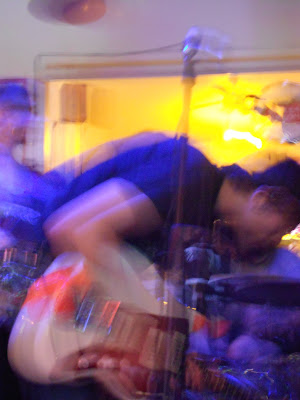 Available on the Sophomore Lounge/Tropical Trash bandcamp, and at fine record stores in Louisville (including at Jim's new one, Astro Black Records, I would assume).
Posted by Brian Manley at 6:20 PM