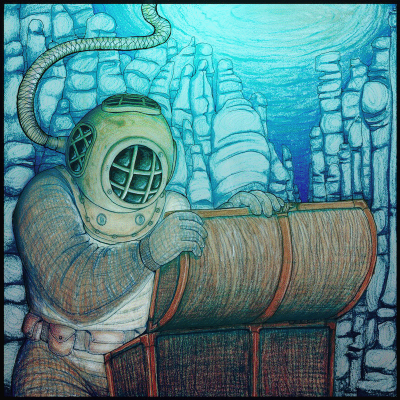 "i really like production tricks/they really pile 'em on/a world inside my headphones to which i've already gone/make me want to make music too/it's what i'm gonna do/oh, how i want to live that life."

Plastic Bubble makes good on that lyric with their debut recording Treble Treasure Chest (Carpathian Cassettes), which will be showcased at their release party Friday night, Nov 16 at Solidarity on Bardstown Rd. Louisville profits from several amazing pop-oriented bands rooted here. Full-lengths, cassettes and seven-inches in the last couple of years from such groups as Whistle Peak, The Deloreans, Adventure, Second Story Man, Toothpicks for Robots and others have proven that original, lo-fi, hi-fi and all around inventive and creative independent pop thrives here. Plastic Bubble can easily swing into that swell, and in fact, are definitely a band that jumps up and down in twee territory, a place I enjoy.

The band has roots tracing back to the mid-1990s when singer-songwriter Matt Taylor formed Blastic Pubble, a project centered on his psychedelic-based home recordings. That lasted until he relocated to Louisville in 2004 and formed The Genius File, a band that proctored some attention, especially with the 2009 release of their debut Some New Invention. However, the band quickly dissolved after the release of that recording. Taylor continued experimenting with home-recordings, adding bits and pieces here and there with a superabundance of other musicians, tracking the recordings at a variety of home studios between Louisville and Russellville, Ky. 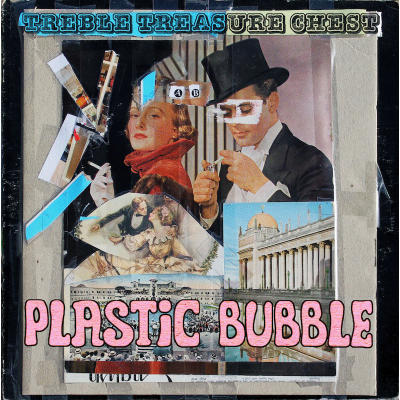 Plastic Bubble was born from this amalgamation of talent and styles. The core of the band is Taylor, Jason Dudgeon and Elisa McCabe, each acting as multi-instrumentalists that all also hold the band together as a live formation. However, Treble Treasure Chest itself is a lo-fi orchestration of a variety of instruments from glockenspiels to saws to modulated rolling pins to peculiar circuit-bent toys and a wild population of handclaps performed by a large picking of musicians, just a few of them including Stephen Shoemaker (Venus Trap, Madame Machine); Jeremy Perry (The Deloreans); Susan Crocker (Lucky Pineapple); Mike Snowden (Whistle Peak); and Jared Busch (Ultra-Pulverize). And that really (no, I mean really) barely scratches the surface of that list. [FULL DISCLOSURE: I added a brief section of guitar at the end of one tune.]

I throw lo-fi at the record based on its organic construction. That term can sometimes construe a certain generalized sound in people's minds. While the techniques may have been lo-fi, the overall sound of Treble Treasure Chest can range through several spectrums, oftimes landing somewhere in a plush space that breathes and exhales all that can exist in psychedelic-pop music. Like the opening quote, a lyric from the opening song "In Love with a Band" (a music nerd's ode to the obvious), this album was almost made to listen to through the enclosure of headphones while the sounds swim through. The music is completely layered, packed with small effects that whisper past your ears as choruses that sound like choirs shout their familial lungs out. Buzzes and twinkling vibes drop in and out of the mix. This is definitely Taylor and the band's dive into sonic experimento-pop, and the results are impressive. The album was produced by Taylor, Dudgeon and Craig Morris using some of the vintage analog gear used to record Neutral Milk Hotel's "In the Aeroplane Over the Sea," and the entire project was mastered by Jason Nesmith (Caspar and the Cookies), who has been involved in the Elephant Six Collective.

The songs themselves are tiny textbooks on the construction of pop tunes, each laying eggs that hatch and run around your brain, allowing you to almost sing the choruses before they end, until the next track starts, repeating the process with a different agriculture of addictive melodies, while all the while remaining unpredictive in structure. Taylor's voice reminds me a  bit of John Linnell's, and sometimes the sing-songy nature of Plastic Bubbles' tracks make me think a bit of They Might Be Giants. However, the album never stays in the same place, as interesting instrumentals are inserted between tracks here and there and instrumentation sometimes reminds me of psych-synth experimentation of The Soft Bulletin-era Flaming Lips, or even at times Yo La Tengo.

I'm reminded of this on "Certificate of Achievement" even more by the intriguing and catchy verse/chorus that suddenly left turns in a la-la horn/xylophone-land that leads into an even more addictive chorus section. The use of the friendly chorus is perfectly placed again on "Under the Snow." And the memorability of "Instant Crush" should make it receive airplay from someone immediately.

Plastic Bubble will release the Treble Treasure Chest cassette at Solidarity (1609 Bardstown Rd, Louisville) on Friday, November 16. This will also represent the final show at Solidarity, and will feature guests She Might Bite, Egret and a special set from Jeremy Perry and Loren Pilcher of The Deloreans. $5.