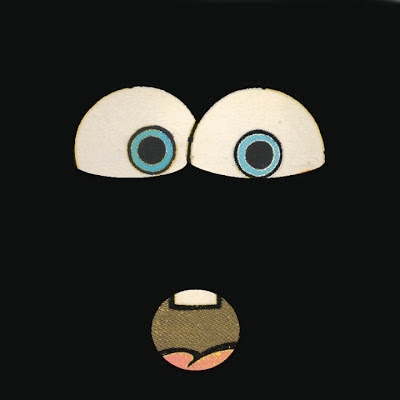 Skimask's "Cute Mutant" twelve-inch provides a gelatinous mass of pummeling percussion and aggressive caveman synth that was surely written to provide the boombox soundtrack for a strutting Mechagodzilla on a malt drunk bender.

I'm led to believe from what literature I have read of this Boston (i think?) based trio that there are no guitars involved, although the screaming distorted electronics that are generated on this recording have the genetic disposition at times of a bass-heavy stringed instrument being punched into the red.

To make this digestible in a treatable palate for locals in Louisville, there are definitely fingerings of two legends here: The Touched's fuck you to the map of punk rock, including Brad Bell's orchestrated clubfooting of electronics during the sloppy Stooges-esque destructo-rock  that surrounded him + Ultra Pulverize's godsend kraut-amid-video-game wrestling match of punk and techno.

"Candy Cane" splits your headache open in a Love666 ballistic feed that hurts the southern oceans of the bowels. This can be a primitive zero time hurt that is not just a diarrhea of tiles and heat that produces a spray of shit in a can that breaks the toilet, but rather a lap through the abyssal plains of deconstructed rock n roll. "Shark Week" makes me think of a party-time Suicide song.

"Temperpedic Mattress" is grating electro punk; the vocalist sounds like he is holding mooring onto sanity with a thin line of distorted mutters. This album never repeats itself; it's nothing but prong-horned bliss that stabs itself with it's own distorted atlantean conclusions, all of which are loud and eventually breaking things down to logs, earth, brush, marrow and rocks, albeit through electronic pampered mania. And it's completely welcome. Good break-up music.

Available through the Sophomore Lounge site.