All things of horror in film eventually come around to Vincent Price. You can’t really escape him.

Like Karloff, whose face and name had become, and would remain, a staple of horror following “Frankenstein” in 1931, Price would also secure himself as an actor always identified with creepy characters and horror films. There are several actors that will always be associated with horror films because of one or two legendary roles: Anthony Perkins will always be scary because of “Psycho”; Jack Nicholson has a certain bizarre insanity that lingers because of “The Shining”; Robert Englund will always be recognized as Freddy Krueger; Linda Blair has the “The Exorcist” locked down.

But not all of these actors necessarily became staples of the genre; actors whose very facial features and voices have been ingrained into American society for so long and so powerfully they are a constant anchor of the idea of horror, transcending even cinema. The characters of Jason Voorhees, Freddy Krueger, and Michael Myers have become legendary in these respects, but not necessarily the actors that played them. Max Schreck’s 1922 portrayal of the title role in “Nosferatu” exists as an image burned into horror forever. Rondo Hatton’s few appearances as The Creeper almost became a stamped counterpart to the genre (which I discuss here). However, the images and sounds of Karloff, Lon Chaney, Jr., Bela Lugosi and Vincent Price have almost anchored the holiday of Halloween for decade upon decade. Just to invoke their names usually means you are discussing something in the horror realm.  Price’s iconic voice was often used in voiceover work that dabbled in horror, including in such popular music as Alice Cooper’s “Welcome to My Nightmare” (1975) and Michael Jackson’s “Thriller” (1982). (It is often assumed he is the voice at the beginning of Iron Maiden’s “The Number of the Beast,” but because the band could not afford Price’s asking price, they used an imitator, instead.)

This entry isn’t to follow Price’s entire career, but instead just review two films he made in the early 1970s, nearly 40 years into his career. Still, they are interesting films simply because they work on plots that reference Price’s standing as the “master of the macabre,” and recognize the associations, and well, typecasting, that exists with him. Basically, if Vincent Price is involved, you know it is probably falling somewhere in the horror genre.

At the dawn of the 1970s, horror films were on the verge of a renaissance. Price had scored several successes throughout the 1960s, especially in Roger Corman’s film adaptations of Edgar Allen Poe stories. He had begun to increase his voiceover work toward the end of that decade, and had begun to make regular appearances in television productions, sometimes as himself. At that point, Price was already heavily associated with gothic storylines. He had also exhibited his sense of humor, earning him a reputation for serio-comedy.

“Theater of Blood” was released in 1973. His last two major films had been the 1971 hit “The Abdominable Dr. Phibes” and its sequel. “Theatre of Blood” allowed Price to fully immerse himself in bizarre imaginative insanity as Edward Lionheart, the Shakespearean actor who has come back from the dead to exact revenge on his critics.

When reading about another film I reviewed a few posts ago, “House of Horrors” (1946), comparisons in the plot between the two movies were constant. “House of Horrors” finds a sculptor exacting revenge on harsh through the murderous reach of the Creeper, his muse and accomplice. However, “Theater of Blood” follows Price’s Lionheart as he himself plans and pursues the death of each critic that prevented him from receiving the “Critics Circle Award for Best Actor” during the last year of his career before his supposed suicide. 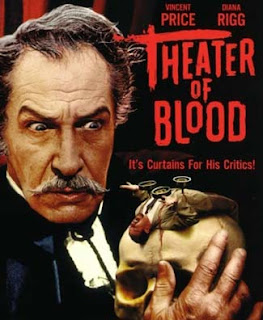 This is the beauty of this flick. Lionheart extracts his revenge by setting up and performing murders based on deaths in the Shakespearean plays he performed in his final year. Based on scenes from “Julius Caesar,” “The Merchant of Venice,” “Cymbeline” and several others, Lionheart beheads, drowns, stabs, electrocutes and just plain terrorizes these critics with such a crazy glee and joy it’s…it’s just fucking creepy. Each scene he seems to relish in his overacting, spouting Shakespeare’s words amid blood and guts in full 1970s color. Supposedly it was one of Price’s favorite films, being a fan of Shakespeare and the theater. The sets are wonderful, bizarre and macabre. His fellow murdering actors that assist him in his “productions” act like ravaging insane zombie homeless people (all of whom are drunk on some purple bottled liquid that I never quite understood). 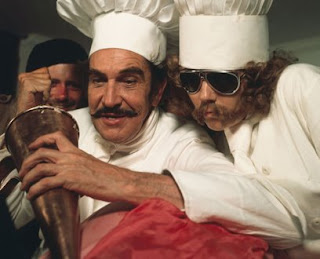 During the whole film I just got the sense that Price was having fun. “OK, Mr. Price: you’re playing a theater-actor killing people while reciting Shakespeare.” “Oh, well, now, how wonderful!” Definitely Price at one of his weirdest moments. 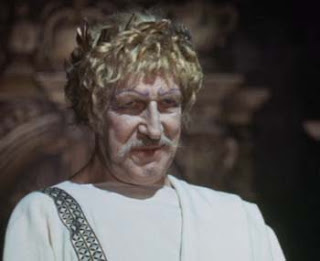 Price followed this insanity up with, well, “Madhouse” in 1974. “Madhouse” follows Price as another actor – Peter Toombes. Toombes is instead an esteemed horror film actor known for his portrayal as “Dr. Death,” a legend of the genre. The idea of “Dr. Death” was created by Toombes and his friend, screenwriter Herbert Flay (played by Hammer Horror icon, Peter Cushing). It is revealed early in the movie that Flay had begun his career as an actor, but once Toombes became successful as Dr. Death, Flay became the main writer of the character.

Toombes’ career basically comes to a halt when his fiancé is murdered the night of their engagement at a party promoting Toombes’ latest film. Toombes is accused of the murder, never convicted, but spends time in an insane asylum. After being released, he attempts to resume his acting career, persuaded by Flay to again appear as Dr. Death in a new television series based on the character. Toombes is reluctant to do so, unsure of his own sanity, which, as the film progresses, is tested frequently once murders again begin happening on the set, all of which are based on scenes from his earlier Dr. Death films.

I wasn’t sure what the quality of “Madhouse” was going to be the night I watched it. I started it somewhere around 1 AM, expecting to follow it for a bit before turning in, and was surprised at how sucked into it I got based on the weirdness that Price, again, delivers perfectly.

The film sets up the self-referential image of Price as the ultimate horror actor. The entire film, while loosely based on the Angus Hall novel “Devil Day” (1969), I believe was re-tooled blatantly for Price. The scenes of Toombes/Dr. Death’s earlier films, shown at various points throughout “Madhouse,” are taken from Price’s classic films “The Haunted Palace,” “Tales of Terror,” “The Raven” and “Houseof Usher” (and even feature, as regurgitated cameos, Karloff and Basil Rathbone). Price seems to basically be playing himself as an older actor, respected by generations of horror fans (although, hopefully Price was not as mentally off-balance and unsure of reality as Toomes). There is even a cast/crew costume party featuring Cushing as Dracula (referencing his role as Van Helsing from the Hammer Horror’s “Dracula” series) and Robert Quarry as Count Yorga (referencing his starring role in the 1970 film “Count Yorga,Vampire”).

“Madhouse” has a sense of fun to it, but is still filled with some shadowy-bizarro imagery. Just seeing Price walk the sets of the television show in full Dr. Death cape, fedora and make-up is worth the price of admission, to me. I just believe that at this point in his career, Price had become so typecast as the horrorific/goth expert, they decided to make a couple of films in which he plays just that – the experienced icon. However, he was not near the end of his long career, yet. Again, following these films, most of his career seems to have been based on just that. Here’s Vincent Price – slightly campy, often with a sense of humor, but he is horror. 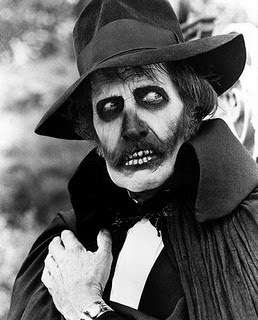 Both “Theatre of Blood” and “Madhouse” might be counted as Price’s last real horror films. As the mid-70s began, his career became one of voiceover work, horror spoofs, and completely self-referential appearances.

Price died in 1993, nearly twenty years later. His last major film appearance was as the lonely inventor of the title character in “Edward Scissorhands” in 1990, which was, in my opinion, Tim Burton’s ode to the perfector of the goth idea he has remained immersed in most of his career. 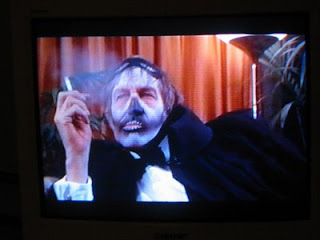 One last unrelated item: the origin of the title of this small series to my personal Fright Fest – “The House of Horrors Became the House of Horrors.” Circa 1999, a group of my closest friends and I huddled around a television armed with beers and blankets and watched the premiere of the “VH1 Behind theMusic” series’ biography of the glam/hair rock band Poison. We made a night of it, relishing in the fun, cheese, spandex and rock. Somewhere in there, guitarist CC DeVille, in his raspy voice, tried to describe the decadence that the band fell into after hitting success in the late 1980s. The quote that always struck me, and the rest of the room, resulting in guffaws all around, was “the house of horrors became the house of horrors.” This became one of those quotes I’ve thrown about at various situations, whether they were my own slips into the well of self-destruction and gloam, or others’ own falls.

The funny thing is, I’ve had the quote wrong since 1999 – yeah, 12 years. DeVille is actually saying, “the house of whores [describing his fantastical drug-den LA party mansion]…became the house of horrors,” which, sorta, makes much more sense. But, a mix of Pabst and CC DeVille’s gargled cocaine voice, made me mistranslate those audio signals over a decade ago. So, I still cling to my original thought, and now, reapply it, tactfully.

Basically, it’s an in-joke on myself, folks. That’s all.

Here’s the clip if you’re interested. It hovers at the 7:22 mark.

Don’t need nothing but a good time. G’nite, Cleveland (what a way to end some writing about Mr. Price).