I've managed to allow a cache of recordings to mount on my office desk here and I'm finally making the time to get to 'em. In fact, the next couple of entries will be dedicated to the release of new music, which is a nice way to start the new year off.

I mentioned this CD back on my list of favored recordings of 2011. I met J.Glenn circa 2006ish. Hell, I don't even remember how. We just suddenly seemed to be pals out of nowhere. Seems some mutual friends recommend I check him out, there was Myspace back in those days, and we connected that way. He showed up at one of my shows; I showed up at one of his shows; we played shows together. I know he appreciated comments I made onstage one night about KISS, and I appreciated his covers of the late wild man Hasil Adkins. In fact, the Hasil connection was really strong between us, both being heavily inspired by the West Virginian one-man-band. My band had opened for Hasil three times in the past and I was devoted follower. One of the first shows I attended of Mr. Glenn's he was one-man-banding it at Uncle Pleasant's cranking out  perfectly scary renditions of his songs. A J. Glenn show is unpredictable, fun and the main word I want to use: honest.

That Hasil style can become thick as porridge in your guts, and while Glenn slams the one-man-band take and acknowledges the mist of the Haze hovering somewhere in his playing, he's always gone sideways directions with it, weaving in and out of stomped rustic rock, hole-in-the-wall country, sharply-planted bluegrass and veering off in further directions towards unknown plantations of psychedelia and other weirdnesses. I fell in love with his last album (unless I'm corrected, his solo debut), "Long Time No See." This is a solid limestone followup.

I feel "Magick Snake" leans more heavily towards certain psychedelic aspects than "Long Time" did, especially on the tracks "Make It Shake" and "Under My Wing," which offer dark moods on his finger-picked banjo and guitar. But genre labels are crap. The main thing about J. is his songwriting and the honesty that he speaks in his lyrics and their delivery. There's a spacey moodiness on this album. The rustic aspects are still present, as he mixes sparse bass stomps and sticking percussion with his strings, stenciling everything with electronics throughout, adding varied sounds throughout the record. Glenn seems to write what's happening in the room that moment. "You Have No Word" is a pensive piece that paints a bleak conversation with someone who has lost the life in them, and the need to leave them behind. "All Smiles" is a straight-up arched beauty driven by what sounds like a toy xylophone clacking with the rim of his snare as J. wavers with his banjo through the night with a grin. A great album ender. My favorite is "Old Friends Make the Best Enemies"; the instrumentation switches to guitar, piano hi-hat that takes the pensive fight with one's mind and makes it sound sadly peaceful. The line "You cannot control your mind" is perfect.

It's all here. Family, loss, love, the shit amounts to some experiences and stabs in the heart. Like the other albums reviewed on this page, this is as DIY as it gets. The liner notes point this out, handscribed to log that everything was recorded on a Macbook with Logic Express. Straight no-chaser music that is all about the songwriting.

Available at his bandcamp and Underground Sounds. 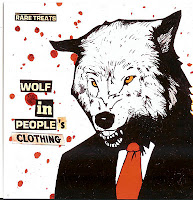 Louisville visual/musical artist Patrick Thompson released this in late '11. I ran into Thompson one night at the Zbar and over a few beers we realized that we had met before back when he fronted the noise-punk band Gaj Mustafa Cell under the name Mick Donalds and I was the dude standing in the crowd yelling "awesome."

"Wolf in People's Clothing" is a quick listen that has a stripped down take on some experimental, lo-fi and punk ideas. I feel like Thompson approached this with an artist mentality, ignoring what songs are "supposed to do" and just going with whatever direction he felt like. Each song it its own creation, and none subscribe to any stereotyped map. The guitars have a tight sound, and the layers of instrumentation make for a style I haven't really heard from other bands around town. Thompson has definitely planted fruit in several directions here, taking creative ideas and inserting them into unpredictable and interesting spaces. The closest reference points that pop into my head when I hear this CD are maybe the spirted rock experiments of Lexington's Rabby Feeber or even the surrealness of psych-rock band Bongwater, especially on the song "That Motherfucker." These references aren't necessary; just the street corners that this recording seems to walk to in my head.

Sure, you can say it's rock-based, but the various levels of vocals on top of each other, the plodding beats and riffs on songs like "Walking" and "Vacuum of the Worst," make for an good, strange, intense listen. The closest to straight punk on here might be "My Face Is Clean," an infected mid-tempo piece. "Where the Hell Have You Been?" just keeps swelling up into batch of obsession. My favorite track is "In My Eyeballs," a short noisy song that just sort of repeatedly hits you in the skull.

The CD can be purchased at Underground Sounds, Better Days, and the Gubbey Records website.

Life Partner is Aaron Osbourne's pet project. Formerly of Louisville and of the bands State Champion and Plows, Osbourne is a Chicagoan now and this collection of lo-fi grew on me pretty fast. Grunge-folk was a term that was thrown at me before I heard these songs; I can see that fitting, although grungey in a fucked-up interesting way. Low humming bassy guitars power through some excellent songwriting here. Sometimes the ground covered sounds downtrodden, but caught in a fishing net of down-strummed catchy abandonment and even a sense of humor.

The song "New Life" can exemplify some of the tunes here, leading off with the  lyrics "It's gettin' harder/To get up/Everyday/Everything's the same/It never changes/Anyway/Go to the movies/Get off work/Forget to brush my teeth/I don't know what I want/Anymore..." My head immediately starting nodding to the chugging beat and riff. The anger backfires into an almost Wipers-esque battlezone of depressive words but addictive melody. The first single "King Nothing" gets noisy and plaguy, and is in and out quick, ending with feedback, bass and a great frustrated groan. "Feelings" ends the album as a perfect point in that battlezone: through the pains of life and brain there are those moments that are still danceable without backing out or backfiring. And that's what I get from Osbourne; frustrated release somewhere in the element of low-burning rock that finds its way into your head and stays there. These songs would be great to see on a stage (which can do by going to the Chestnut House on Sunday Jan 22; Life Partner will be performing with Savages, Mote and The Debauchees).

I'm not gonna lie; the track that sucked me in at 2am on a work night when I was up too late listening and plodding through some old pictures was "(I'm) Getting Older." One of those perfect late night moments of "yup" that led to repeated listens.

"Dogs" will be released by Sophomore Lounge on January 24 as a cassette. Pre-orders are available at their site.
Posted by Brian Manley at 1:37 PM