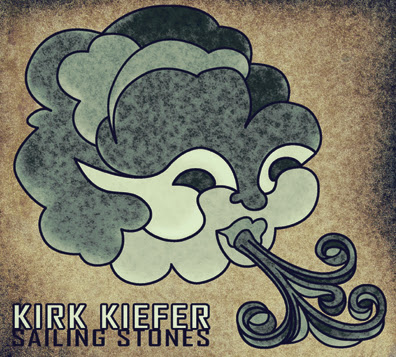 "Sailing Stones" is the debut solo CD from singer-songwriter Kirk Kiefer. It was produced and arranged by the collective headed by Kirk known as Ice Gondola, which is also the name given to those that play with Kirk in live situations. "Sailing Stones" represents at least a year of writing and recording for Kirk, who immediately set out on this path once his country/rock band Yardsale went on "indefinite hiatus" in 2010. Having known Kirk since circa 2006, I've seen the work the man has invested in the band environment of Yardsale, and then saw that work ethic swung around and centered onto his vision here. 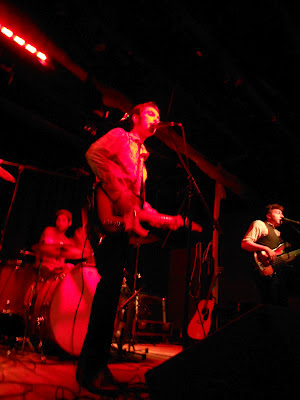 Despite this being his solo debut, "Sailing Stones" can also definitely be called an ensemble effort. Besides Yardsale, Kirk has performed with many bands here in the Louisville scene, including the Health and Happiness Family Gospel Band, Bad Blood, Adventure, Vrktm...the list is long, and members of some of those groups weave in and out of this recording. While Kirk handles the lead vocals, electric and acoustic guitars, bass and vibra-slap throughout the CD, appearances are made from Bob Dixon on guitar (Thomas A. Minor and the Picket Line) , Neil Hulsewede on pedal steel, Jacob Lee on harmonica (Yardsale), Scott Moore on violin (23 String Band/Joan Shelley), and Todd Hildreth on piano (Squeezbot/The Java Men), as well as a wide range of others. An entire horn section made up of Elmer White, Adam Heffer, Randy Burt and Todd Mullins doesn't fuss around on "Sailing Stones," either. [Full disclaimer: I play a little mandolin on one track.] 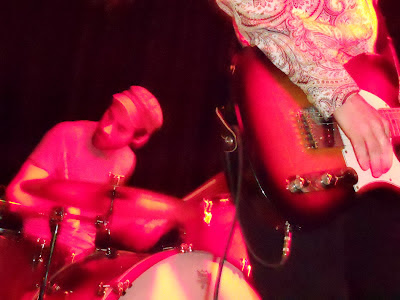 The bare center of Ice Gondola definitely seems to revolve around the presence of percussionist/drummer Colin Garcia and bassist/background vocalist/engineer Ted Stevens. Garcia was the drummer for the final incarnation of Yardsale. He's one of those few drummers in town that immediately blends his personality with his playing style; I can recognize some Garcia drumming almost from just hearing a recording. Colin not only added percussive tricks and variant paths to follow on this album, but seemed to be involved in its evolution from almost the beginning. The same can be said of Stevens, whose solo recordings and performances have almost coincided in timing with Kirk's. Stevens backs Kirk on vocals, and in the live setting maintains the bass. All three seemed to have locked into the arrangement and production of Kirk's songs, bringing them all into their own personality on disc.

And that leads to the anchor of this entire recording: Kirk's songs. 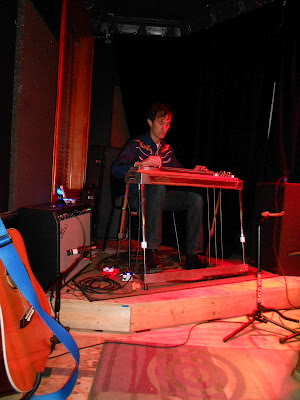 Kirk swims through a heavy repertoire of musical influences. However, none of them ever take over his sound at any point. These are Kirk's babies; his influences never direct him or turn into a smothering reference on any of this music. I think he knows what elements he likes, and has applied subtle notions that he has learned from the musicians, bands and albums he adores. Kirk has an undying love for the Beach Boys; however, unlike a lot of indie acts over the years that have based so much of their nucleus on the layered pop of "Pet Sounds" to a point of creating a swirl of unidentifiable generic-ness, Kirk's songs never pirate or rip from his influences. 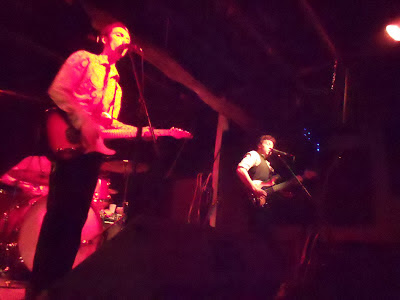 "Sailing Stones" starts with the sound of a transistorized Kirk and his guitar that eventual fuses into full speed and stereo and band with the end of the first verse of "Call Home." The song is a great opening track that sets the pace for the entire album: carried by the drive of the acoustic guitar, its sees that "li'l bit rock; li'l bit country" mantra raise its head and sway back and forth between the two, happy to slide between genres and styles. It also acknowledges one of Kirk's biggest influences, Michael Nesmith. Like I said before, that doesn't mean the album or any of the songs sound at all like Nesmith, but Kirk's tunes have that penchant towards country-influenced pop rock that concentrates on the melodies and the lyrics. There is a catchiness that is patched and hardwired in these songs that ultimately is divided between the singer-songwriter playin' his songs boiled down and straightforward, as well as the addition of the full band to round out the sound and add to the music, while not overtaking the core of the song. I feel like I especially hear Nez's spirit hiding in songs like "An Old James Dean," "I Don't Care Anymore," "Kari I Know" and my personal favorite from the record, "Tomorrow Today." 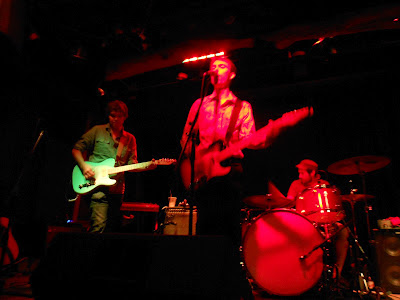 Another aspect of the album that shines is the use of layering on the songs. Again, knowing Kirk, there is that love for Brian Wilson's multi-layered approach to even the simplest melodies. Kirk is subtle and doesn't predial every song using every musician and instrument available. Moore's violin pops up in just the right places, as in "Can't Figure It Out." Garcia's use of different percussion instruments throughout gives each track its own style. Hulsewede's pedal steel and Lee's harmonica in the middle of "Falling Ahead" is some of the prettiest music you can ask for, and that song sees Kirk's use of layered vocal harmonies the closest he comes to referencing them crazy Beach Boys. At the same time, there is rockabilly flavor added to "Settling" and "Surgeon's Sure Hands," and what seems like a Springsteenian full band blowout on "Like a Black Hole," especially when that horn section kicks in.

Highly recommended. Available on bandcamp, kirkkiefer.com, iTunes, Amazon, and cdbaby. Or at a live show.