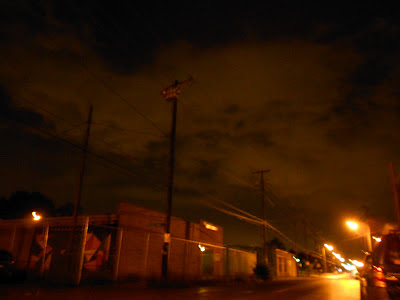 This dream last night made my mouth taste shut when I woke late for work this morning. It started with my discovering a video channel on archive.org called Shocker Drive-In: a digital recreation of going to a drive-in movie sometime in the 1950s through the 1970s. I stayed up past the safety bedtime watching cartoon popcorn boxes dance, the faux-invention of corn dogs, and public service denouncements of vandalism to the venue, followed by a screening of screams centered around both Roger and Gene Corman's films. When I finally forced myself to the hay nigh 2am, my brain was fuzzy.

I dreamed. Somewhere in my dreams, I attended a baumy, summer-nights-on-my-radio drive-in. After getting home late from the movies, I was deciding whether to go to bed or go get some late night pizza. I apparently was living in a college house, and my concern for making it to work on time somehow became twisted into my concern for making it to classes on time. I needed sleep to understand those upper level Geology classes, I kept thinking. Several mushy incomprehensible dream minutes/hours/chairs later, there was an explosion near the house; or a shootout! Or giant haunted cave-beast attack! Who can tell!? All my friends were scattering from the pizza-gas station. They yelled my name, telling me "Run, Sex Dragon! Run!" We were all running to our cars in fear from a monster/madman/giant mushroom/gorilla that was firing lasers/bullets/frowns from his fingertips or gun or red Satan-eyes.

I saw my friend Neal's white van skid off. I hopped into a car with Matt from local punk band The Teeth, and then realized we all ended at the same place: our dorm house, which was, in fact, The Cathouse in Germantown/Old Louisville. And then I realized all my roommates were the people who attended the Blues Control show at The Cathouse on Thursday, July 23.

"Listen to me, Sex Dragon," Dream Matt addressed me, calmly. "Classes don't start until late afternoon. So go back to bed, turn off that alarm; sleep in; all is fine." 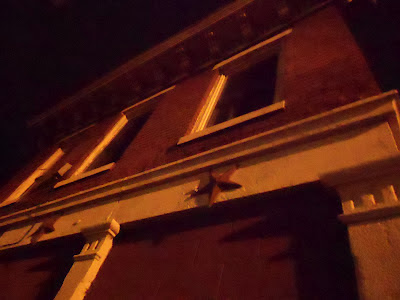 I adhered to Dream Matt's advice and was actually very late for work today. But I don't blame him, or the real Blues Control.

But what is the real Blues Control, anyways?

Before that drippy Thursday night show, I knew they were a duo from Queens that had played Louisville in the past, being brought in by Sapat, the River City anchors of experimental carousing. A few days before the show, Old Baby and Sapat member Neal (see white van driver from above dream) informed me that Blues Control had cracked the Billboard New Age charts and had peaked at number 5. This fact intrigued me to just what sound was going to come from the two on a summer night that was so humid I felt like we were being cremated in our shoes on Preston Avenue. It also intrigued me that Sapat was bringing in leaders of the Top 40 New Age movement. 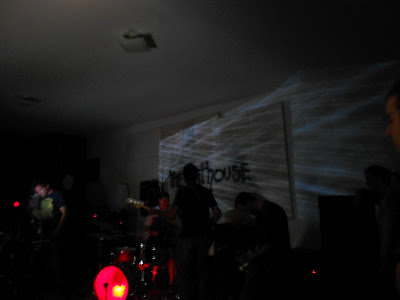 I showed slightly late, unfortunately missing tunes by young Louisville band Wet. I walked in disorientated and swayed to Parlour, after which we all commenced to wringing our shirts of sweat into the backyard during a passing storm of lightning almost directly above us. Before Blues Control began I found myself engaged in talks with a fan who had witnessed them in their prior visit here. He attempted to describe the experience and sound, and found it difficult. He talked of BC being one of those bands that denies as much as defies genres; that just takes the music where they take the music. Plus, he added that he had taken acid right before that particular show. I believe his exact words to characterize the experience were "it was like hearing (or seeing) a freight train run through Bobby McFerrin's voice."


With that, the lights went down in the Cathouse, and we entered. I hovered and skulked behind amps, glancing the duo from afar at first. Guitarist Russ Waterhouse was nearest me and as the resonance ran through time and vision I was already captivated by the sparkly Mustang he played, standing behind a wall of wires and unpredictable sound concoctions. Directly across from him, keyboardist Lea Cho underwrote the swell of music through the keys, parceling between melodies and rhythms. As the music began to climb, I was pretty sure my head became part of the amp near me.


Blues Control. are touring in support of their latest LP "Valley Tangents" (Drag City), which is the recording that has earned them the aforementioned recognition in the popular New Age community. I don't listen to much music in that record store category (I didn't even know it still existed as a category), but I'd be willing to bet that Blues Control presents more challenging music than what is often accepted in that realm. The guitar changes direction often, technologically hopping on board with itself occasionally into a piggyback of seemingly undesigned soundscapes and melted percussion. Only after setting a pace or melody line that swims somewhere in the waters of jazz fused with an almost children's singsong that dips and sashes into a noisier subzone before passing into an angelic spin. 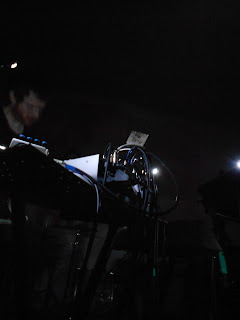 The mugginess of the summer night parked itself inside the thule of all of us there, and at times I felt like a chant from the audience could have coincided with the hypnosis Blues Control creates in the live situation. The Korg created a groove out of no percussion, but the simple chugging of notes and aligning of Cho's fingertips, which would dip in and out of melodic refrains and themes, sometimes delicately, and sometimes forcefully; sometimes both. The set was a juxtaposition of temperate notes delving and diving because of their synchronicities within one another; the guitar would almost build a slide for the keyboards to tip-toe down, and then both would swerve into a jump through the puddle at the bottom, and ditch roll to the end of the song. 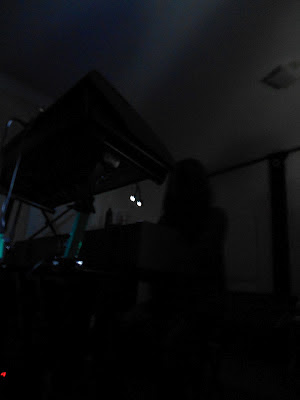 And then Waterhouse would hit the cassette player to his left and something altogether new would happen. There were references to 70s soft rock that had boils of melted heavy metal and warped old blues hidden in there, but that would all be a blind trap that would patiently pursue an end that was never expected.

Sapat followed, with Kris Alplanalp beginning the set seated with an old electrified acoustic guitar. The more I experience Sapat, the more I am endeared with the directions the band takes. Their songbook seems to expand into more pages than there are members of the band. Nothing is ever pre-dialed with Sapat, as Alplanalp's voice shifts the band through variants of rock filtered through key changes and keys from other planets. With the horn section bombastically wrestling amongst the guitars and Jeff Komara's drums, it was loud and perfect for such a sticky evening. At one instant I felt like I was watching a German big band populated by gypsy musicians playing a hypnotic Malaysian theatrical piece. And Dane Waters rose above everything with That Voice. 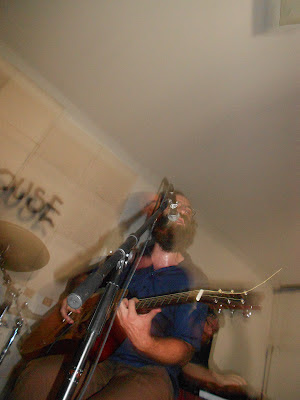 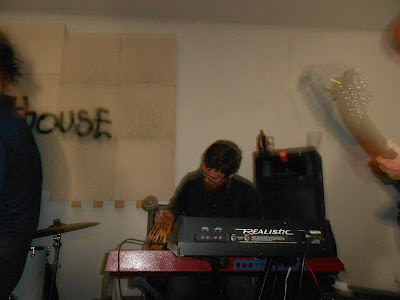 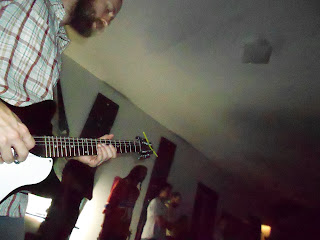 It all made being late for work worth it. Although I still don't know much about Geology.