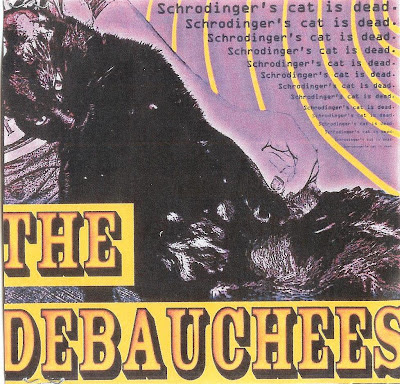 I was in a band in high school called Black Angel. We were all freshly learned on our instruments. Two guitars and a drummer. Fascinated by making the music we obsessed over, we never made it out of the basement, practicing at the drummer's house on Saturday afternoons. We were still teaching ourselves, and regulated our playing to straight covers of what music we collected at the time: the drummer and I stuck ourselves in riffs and fills from Metallica's "...And Justice for All," and the other guitarist brought in Hendrix and (much to my disdain) Lynyrd Skynyrd. Vocals never really surfaced; we just jammed instrumental versions of metal and southern rock. Finding originality and our own sound and style never came about before we all split for colleges and other declining lifestyles. 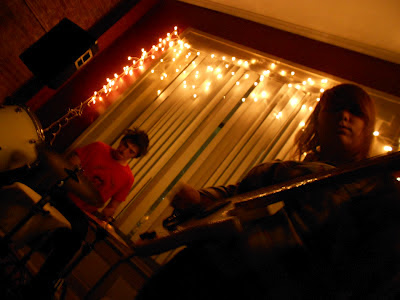 Stumbling onto the freshly graduated members of The Debauchees at the Chestnut House earlier this year makes me feel a little inept that we never even tried to write real music at the time. A band this young cranking out such creative sounds makes me a bit jealous. The Debauchees aren't a band that you can say, "damn, they're really good for their age." They're really good period, even stacked against people that have been playing for decades. I finally managed to pick up their debut CD-EP "Schrodinger's Cat Is Dead" at a recent gig at the Rud, and am really impressed by it.

I really can't think of another band in or around Louisville that approaches the sound of The Debauchees. I feel like they've swooned into their own creative niche, but at the same time aren't cornered there and definitely diffuse themselves into other arenas of sound. Describing their style is problematic without relying on precipitant generic genre descriptors and overly-haunted band comparisons. The Debauchees take their root somewhere in the molecules of new wave, I think. They don't follow this genre like its their fuhrer, imitating and transcribing straight from "1979" or "Marquee Moon," but instead grow out of it and chase various smoke trails from that as a starting point. Their songs greet pop and shake its hand, but don't embrace it for the full hug. Often, they step outside the lines and the songs themselves run through unexpected blends. 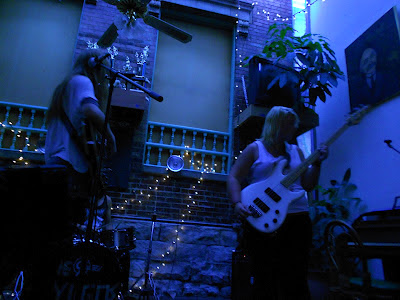 Sometimes bands crash through a variety of genres, but The Debauchees easily blend them and deliver them paced and accurate. Sydney Chadwick's guitar talks like David Bryne's mono-noted picking on such Talking Heads' tunes as "The Good Thing" in one space, and then palm mutes blues structures a la the Modern Lovers, then bends notes into a surf zone that might eventually click upwards into a revived ska-strum. Cameron Lowe's drums add the style skips, segueing through various beats within one song, at times sound like a live rapid disco machine and others four-fouring it through a straight loud punk rock stomp. And Ashley Bowen's bass is the walking glue to the machine, often taking the front line and leading the trio. In a song like "Jack," my first thought was the power that Kim Deal references when leading a pack like the Pixies. The bass does not just serve as a backdrop to make things sound warm; Ashley actually swarms around the notes on her bass guitar, using it as much as a lead player as she does a rhythm supporter, running it everywhere. 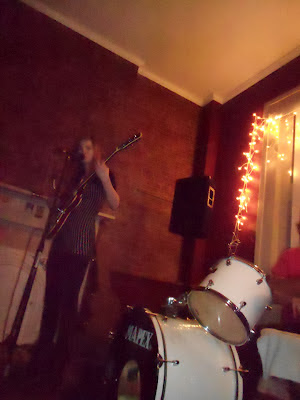 Chadwick's voice sings strong, and often crosses into a pose that seems to bleed Nico meeting the lower ranges of Deborah Harry, especially in places within the tunes ""Whatever Just Go With It" and "I Just Sit Around." The songs careen into various time signatures, riding the loud quiet loud with confidence and unpredictable starts and stops that make me scratch my head with joy. I think my favorite track here is "Misty," starting with a solemn bass and drum prance, with the guitar poking in and out, until everything seems to fall apart and then rise back again, with the drums double-timing, the bass bobbing your head, and then everything swooning into a see-saw spaciness that is just beautiful. Later, the song reinvents along its own trail into a ska-ish beat that is blended perfectly.

And where else are you going to hear a song that takes lines from "The Shining" and dances them up for you? Nice. Recommended.

Check them out at the following upcoming shows:

1. Northside Tavern in Cincinnati, Ohio with The Minor Leagues and House of Feeble Minds - Free - August 11th - 9 PM
2. The Rudyard Kipling with The Uncommon Houseflies and To Light A Fire - August 16th
3. The Bard's Town with Plastic Inevitables and Been to the Gallows - September 1st - 8 PM

Email ThisBlogThis!Share to TwitterShare to FacebookShare to Pinterest
Labels: Schrodinger's Cat Is Dead, The Debauchees

Send me an email at SirVincentAllen@Hotmail.co.uk