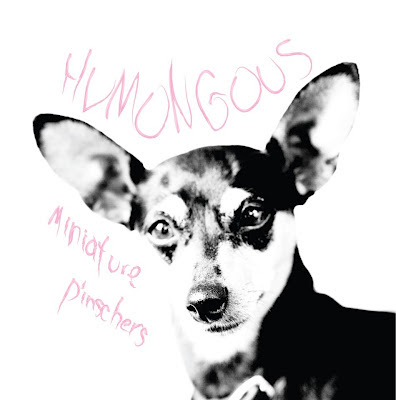 Humongous makes my head spin and turns my gangly, narcissistic, fustian record review guesses and cross-references to at least 50 percent peanuts. My first listen involved a 1 AM text to Kris Abplanalp, gagging at him for letting me listen to a record I'm not sure I can describe. Was I cursing him? I think maybe I thanked him. Or maybe I just typed him with a blank stare "i don't know."

"Miniature Pinschers" is the return of local bizarro-rock band Humongous, and the return of and the latest from Alplanalp's long-standing Louisville-based record label Black Velvet Fuckere Recordings in conjunction with Adept Recordings and Consanguineous Records. It was recorded and mixed by Dan Willems, another underground legendary who plays with such groups in Louisville as Sick City Four.

Humongous plays rarely. I saw them once last year in the now defunct The Lounge. Eating popcorn on the outskirts of the Highlands and Downtown, they came with a reputation for talent and a left-turn originality, and that live show lived up to the described notoriety. I'm hoping the new album will bring them out into live situations more often.

The band is a four piece group of world-getters that tackle the international problem of predictability and boringness in all forms of life and love and art and all that. There is tension that reels and sways and drops and returns in these songs. Drums and guitars swim through an erratic river, sometimes racing each other with irregular timings while a cornet bleats above all the aerobatics and mathematics, eventually reaching a head-bobbing riff-verse that can drive you crazy with its catchy nature. We are talking spasm rock that crashes through a waterfall of smarts and fun.

Diving into the pressing, "Panty Boy" is a good start to try and describe the places this album goes. A lot of arithmetic is involved somewhere in the construction of this music, but not in any predictable "post-rock" bullshit moniker. Most of the songs seem to change structure and time frequently, coming back at times frantic, to slide into a jazz run, then into straight riff, making me think in terms of Zappa, although that would not necessarily describe the tonality or song sounds at all. But the influence might be in there. Somewhere. Along with a million others. Its a tossed-about conductance that mines a lot of variant rhythmic and melodic arenas.

And that's the big picture in which Humongous approaches music. There is nothing prejudicial in the gaggle of genres that they chop, slice, juice, cuisinart and saute together. It can come from anywhere and any direction. The guitars overdrive chivalrously through "Never Mind What the Czech Girl Said." "Click It Or Ticket" is song that you will not be able to amputate from your brain after listening to it once; the cornet, drums and chunky guitars prehend each other in some outer world bout only to flip the switch and let Jess Myers' vocals swing up and down. Lines like "In its infinite wisdom/the government has raised you to/talk to the people that/most closely resemble you in/any kind of way..." are delivered so addictively you sit and nod with them.

And then rising in the midst of the frenzy like a blind trap comes "If P Had W," a simply wonderful electric country song.

"The Hill" on side 2 leads into the most Zappa-esque experience on the album, at least to my ears. There's a tussle between voices as they vie for control of the song. "Hook Up the Keyboard" presents a rocking love tune to keyboards with Jess' voice soaring somewhere between Tom Verlaine and...I don't know...Bunnygrunt? "Intervention" is a theatrical jazz garage rock song describing what the name says and leading you to the conclusion of WHAT DOES IT ALL MEAN?

"Miniature Pinschers" is not a selfish album; it fucks your soul up and gets out quick. Despite bob-tailing on a trail-drive down art rock lane, it ain't boorish and vain in any sense. Make no mistake, these are just rock songs that happen to be unclassifiable. The sense of experimentation reminds me of The Residents, but this album in no way sounds like The Residents, so strike that audial comparison. Humongous never sounds like a band that intentionally pulled the rug out from rock n roll in some pose-striking endeavor; they seem like they just started making songs without any subscription to any already-affirmed and formed music scenes.

Available on October 13.
Posted by Brian Manley at 4:35 PM

wow what a love dog.