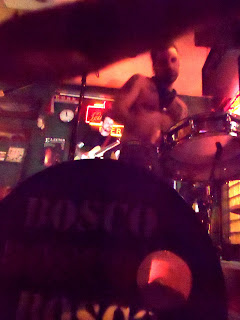 My Mother has chided me often as not being a fan of country music, knowing me mostly for playing and listening to rock and its thousands of cousins. I've tried to make her understand that while I mostly despise top 40 country music made after 1980, I'm a pretty huge country music fan, but with parameters and standards. My taste for Country & Western run old, back when it was called Hillbilly Music, when parts of it jaunted like a piece of cheekbone out of the side of Bluegrass and when it added a bit of Blues into itself, as OK'd by Jimmy Rodgers. Back when it was one of the first, along with Blues and Jazz, to grow up as real, true American Music. Back to the Carter Family, Hank Williams, up into Roy Acuff. Basically, the 1920s through the 1960s there was country music that was, in my opinion, real music. I'm even a fan of the Cowboy tunes of Gene Autry, and if you like punk but don't acknowledge honky-tonk and rockabilly as its origins, then you may not actually really like punk.

Of course, I'm a John Cash fan, and have listened to so much of him I've almost put him on a shelf for a few years. But the outsider, trucker country tunes of the late 1960s and 1970s are where I get stammery and slobbery. Yeah, Cash and the Sun Records folks before it went from rockabilly to rock and roll; Willie Nelson's retreat from Nashville to Texas to make his own sparse folkish country with attitude, and Kris Kristofferson's "fuck you I'm not leaving so deal with it here's another song" mantra have created some of my favorite albums of all time. Well, and then there's John Prine and then there was the whole No Depression rivets that occurred and and and...gets my fanboy blood rising. I could go on and on. My point is, these songwriters were just that: songwriters, not just song buyers. And for me to enjoy some country music, yeah, I like the sorrow, the heartache, the flirtin', the fightin', the mud the blood the beer. Those elements need to be present. C'mon now and dance all night with a bottle in your hand...

Louisville and Lexington both have always had a good stir of country music-influenced bands brewing and simmering. As always, things run in what Willie Nelson called Phases and Stages; sometimes there are more than other times, and sometimes the country's thicker, sometimes the rock's thicker, sometimes there's folk infused in there somewhere, sometimes you can call it Americana. Lexington birthed a billion such as acts, going back to bands like the Blueberries and beyond. Just in recent years Louisville has seen country music run through its roots in such acts as Yardsale, JGlenn, Scott Mertz, Robbie Cox Band, Health & Happiness Family Gospel Band, Waddy Peytona, Adventure...and these are just ones in the past few years that come to mind immediately.

Two newer acts have been playing about town this last year that I've definitely come to enjoy. One would be my brother Derrick's latest band The Bottom Sop, which I reviewed just a few days ago right here. These folks take their influence from that 1960s and 1970s era, performing duets inspired by the likes of John & June, Porter & Dolly, and George & Tammy. They also head into their own originals with the songs of living and hurt I described above. Definitely an act to check out live. A recording is in the works, too.

While attending one of my brother's shows, I was approached by a former a co-worker from my days at the Comedy Caravan. I hadn't see seen Sam St. Samuel in years, and ended up buying a cassette from him of his new band, Bosco.

Bosco started up sometime earlier this year. I asked Sam when, but I soon forgot; I warned him that might happen after I finished that Pabst I was drinking at the time. The band has two EPs - "Basura Blanca" and "B Is for Bosco" - both available through that link on their name. Both EPs were recorded by Mike Notarro in Bloomington, Indiana, at Sound Workshop Records. Sound Workshop has built a pretty impressive cache of cassette-based recordings, all flooding out of a cardboard box at Bosco's show Sunday, December 4, at the Mag Bar. I got hungry to buy more, and will be getting in touch to hear some of the other groups he's been recording. It reminded me of the cassette-based label freesound back in the late 1990s in Lexington's noisy/experimental scene. 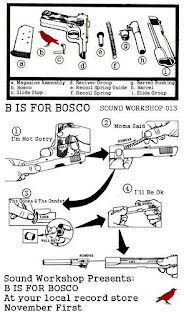 I listened to "B Is for Bosco" on the 1980s double "cassette mechanism" I acquired from my Grandma's attic last year after she passed away. Sam told me I could use the card inside the cassette to listen to the free download instead, but well, fuck that. I like tapes. Out with Michael Schenker Group, in with Bosco. The player is in the kitchen, so I usually do my cassette time making some bizarre attempt at a meal. Bosco, chicken stew, beer, PLAY.

It's a four song EP that I have to admit I was a little wary of at first. I see a lot of bands and get a lot of CD-Rs and while there are several country/folk/whatever artists that I love, there are some that lean in directions I can't really go. There are styles of folk music that people will call country, and are too self-aimed and self-serious for me to really get into. The EP started with a rolling solo piano and my first thought was that the wrong tape had been put into the sleeve. Then fading in and over-top the piano was a pretty, sparse, plucked guitar, and I got confused. Maybe it was the music, maybe the beer, maybe the stew: confusion. The piano faded out, snare slowly slid and lumped behind the guitar, with bass being provided by a cello. And this really beautiful female voice sang slow and sad words about past baggage. And I was into it.

First impressions can mean something, although I don't think they mean everything. This first song - "I'm Not Sorry" - wasn't what Sam had described the band to be to me when I bought the tape from him while we were at a loud bar. He alluded to punk and country and rock and roll and a sense of humor. These words were great; sarcastic, but a little bitter and I pretty much fell in love with whoever was singing it. If the song had stayed at this level, I would have still loved it. The cello roamed up a bit in volume and the singer sounded mournful and while I was prepared for drunk country music, my first impression was to be impressed at what the song was doing overall, instead. Then after that second verse, it got even better. That mournful voice suddenly seemed to get a little bitter, and as the snare started building and quickening, the voice went irefully into almost laughing disdain at whoever the lyrics were directed at as the band kicked in. For the next minute and a half, "I'm Not Sorry" did become a country band that fucks things up and doesn't care. Mud, blood, beer, stew.

The chorus on that first song takes a quality Bosco throws up well and often throughout the EP. As the singer on "I'm Not Sorry" moves from sorrowful confession to a callous and unsympathetic sorted kick in the face, the band began a catchy call-out along with her: "I'm not sorry I'm not sorry I'm not/I regret it I hate it and it hurts a whole lot/ but I won't take it back just because I got caught." That singer, Mary Kate Craig (Sam's sister, and the cellist on the recording), well, fooled me from the start, sounding innocent and sad then unremorseful and made me like it even more. I almost apologized to her for falling in love with her for those three and half minutes when I met her at the Mag Bar, but that would have been confusing, made no sense, and just been weird.

The rest of the tape maintains the energy and attitude "I'm Not Sorry" ended with: an unapologetic catch-all that is honest about bad behavior and loneliness. And that's what I look for in actual country music. Some heartbreak, some losing, some fucking up, and a lot of drinking. It's why I always feel like country music and punk are such close bed pals. Sam takes the vocals the rest of the album, leading Bosco along with Trey Oswald's snare and voice backing him the whole way. "Momma Said" cuts at a gone relationship and just sounds classic. Between every track that rolling piano reappears, rearing in the dancing slap of the songs with some underneath melancholy, which country should have. "The Goose and the Gander"  sounds great led by Peter Bolton's steel guitar and Trey's sticks and has all the elements in place: "I don't walk as much as I meander...and I just can't tell the grass is always greener/but it's still just grass and the money's always cleaner/but it's still just cash and I can't save a dime to save my life." That whole song runs like one big payoff chorus, with Trey and Sam never really pausing for breath.

The tape ends with probably my favorite tune, "I'll Be OK," which patches along with the cello and snare taking the lead and the opening verse setting the tone with "I wake up every morning and wish my demons well/and they just look at me and roll their eyes and tell me I'm in hell." Yup. And goddamn those choruses; they get too hard not to sing along with. Would Dropkick Murphys having breakfast with the Skillet Lickers be a weird comparison? If so, I guess the band can tell me to fuck off when they see me at their next show.

Bosco's show at the Mag Bar was a good rowdy event. I showed too late for the opening band, and never knew who they were. Apologies. Next up was Pete Stein and Black Tiger Fire, a three piece from Colorado that played its own nicely styled mix of honky-tonk-country with some folk leanings here and there.

I ended up purchasing some homemade honey from the stand-up bassist/bee-keeper Jonathan McCarthy. Don't tell my Mom; it's a Christmas present for her. Made by a real live country musician.

Bosco opted to play on the floor, except for the steel guitar and lead guitarist, who both took over the stage behind Sam on guitar/vocals, Trey on vocals/snare/bass drum, and my pal Sheila on bass guitar. No cello in the live setting. There was the pressure from management that their set needed to end by midnightish to start karaoke, which seemed a little silly to me. Karaoke is fun and all; live music is funner. 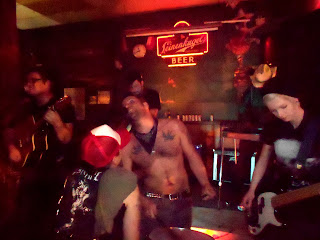 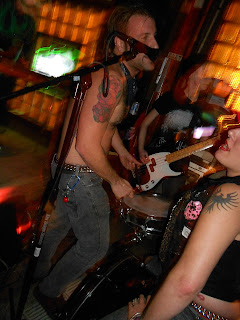 It was pretty energetic. The band knocked through a few songs I had never heard, hitting some of the tunes on the "B Is for Bosco" tape. They lined their backline with about 17 PBRs, took shots throughout the set, and nailed the songs. There was some tension as the clock ticked and they tried to cram as many tunes in as they could while the crowd yelled and danced. But that's country. And punk. And rock. And live music. And why it's so good. 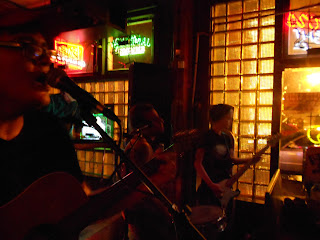 Bosco is playing at Baxter's on Monday, January 16, with Trophy Wives and Late Ones. If I understand things correctly, The Bottom Sop should be on the bill, as well, making it even more awesome.

This has been my first record review on this blog. I need an editor.

Yep, an editor would help you some, but at least you have interesting ideas in writing.