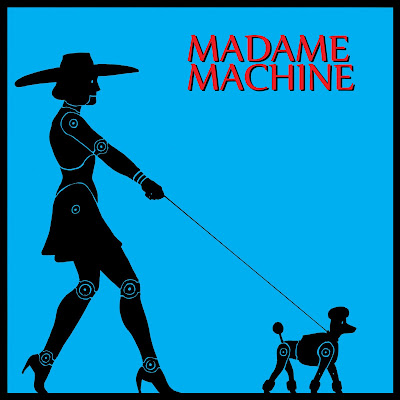 Make no mistake, Madame Machine are a capital letters ROCK trio that embroils and twists the definite lines and structures of rock music, pressurizing their ideas and various influences into a mash that makes a lot of sense. To put it simply, it can get complicated with this band, but in the end, it's a beautifully creative and challenging mixture.  Made up of Salena Filichia (formerly of Venus Trap) on bass-synths-vocals, David Cundiff on guitar-synths-vocals (formerly of Lucky Pineapple), and Forrest Kuhn on drums (formerly of Sunspring),  Madame Machine are almost a poking stick to the supposed ceilings of background rhythm departments. Salena put it best in a recent brief interview I did with her when she said, "We are a band made up of the rhythm sections of other bands that were not really stereotypical rock bands."


Madame Machine just released its sounds on a self-titled debut seven-inch for Noise Pollution, and celebrated with a show at Third Street Dive on Friday, March 30, with Louisville punk band The Hal Dolls and Philly-NY-based punk-free jazz band Many Arms.

Madame Machine was started in late 2010 when Salena and Stephen Shoemaker (former drummer of several bands between here, Lexington, and further places North and South, including Venus Trap, as well) got together post-VT to work up some new ideas. Instead of my summations of the band's background, I'll just roll tape on that interview with Salena now.

brine: Who is the new drummer, and where did he come from?

Salena: Forrest Kuhn is our new drummer. He's a veteran to the Louisville scene. From Sunspring to The Halifax Pier to Black Cross, he's been around town and elsewhere with his drums. We had big shoes to fill and not only needed someone who was a really good drummer, but someone who was a compatible personality. Forrest came as a suggestion from my bandmate, Becca, in Julie of the Wolves. He came in, he played, he hung out and has been a really solid drummer and a great personality to interact with.


brine: Prog. Let's talk about it. I feel like you all have a huge prog-thing going on, and I believe I've heard David talk about that [or read that when he was interviewed recently by our friends Never Nervous]. Venus Trap seemed proggy to me as well...is all this progginess coming from you? In VT, were Stephanie Gary and Miranda Cason into prog? Is Madame Machine something that let's you get even more core about it? The lines, riffs and timing in those MM songs can get pretty complicated and shift all over the place...Also, I've decided to turn question 2 into a drinking game. Every time I say "prog" we both have to take a drink.

Salena: I guess that we have some wacky things going on. I like complicated things. I never wrote any songs for Venus Trap. Stephanie and Miranda are the geniuses behind that sound. They wrote songs that could have sounded either simple, or complicated. We chose complicated when appropriate, I think.
David came out of Lucky Pineapple, which I think was a totally different sort of complicated sound.
I'm not incredibly familiar with a lot of prog rock. Like you, I know Rush, I know Dream Theater. I kind of liked Genesis's "Selling England By The Pound" and while I haven't listened to a lot of King Crimson, "In The Court of King Crimson" is a pretty great album.

Long story ending, I like playing things that are challenging...

I finished my bourbon by the end of question 2.

Salena: Growing up in Eastern Ky, the only female bass players that I saw on MTV were D'Arcy or Sean Yseult. Neither played anything really exciting. So when Venus Trap needed a bass player, I learned real fast not to be either of them. They are maybe my influences in that those are styles that I didn't want to play something simple. I had my own stereotype of the female bass player, which I think is an actual stereotype of female bass players. As far as bass that I can relate to in that influential sort of way, Fred Smith of Television. Steve Harris is pretty amazing, too.

I don't think that I can pinpoint any specific influences for the band as a whole. We are a band made up of the rhythm sections of other bands that were not really stereotypical rock bands. I think that really, we just play and things happen.

Vocally...I try really hard to get in tune, but not hard enough. I have a higher pitched voice, so lower range stuff is difficult, but higher range on that doesn't sound right to me. Also, just to be heard enough so that there isn't feedback.


brine: I know the band started with you and Stephen playing with some ideas. How did David get involved? How soon or later into it?

Salena:  Steve and I started playing a couple of songs in November or December of 2010. Something was missing and we started talking about adding a third person, but it had to be someone who could play more than one instrument and one of those had to be a synth. Mostly for the absurdity of 3 people playing synth, and other instruments, at once. Because we were having fun with it. Steve and David had been playing music off and on. We asked, he came to practice and it was exactly how it was supposed to sound.


brine: What are the future plans as far as recordings, touring?

Salena:  We are going to start demoing some of what we have so far. We are also working on new material. We played a couple of new songs at our record release show. I think that we have a lot of ideas on the table to work with that are pretty exciting structurally. I think that I would like to get a few regional shows this summer/fall and then shoot for a full length later this year/early next.

The seven-inch is a complete pocket of sound that makes it easy to walk over to the record player, flip it, and play it again several times. Further discussion eventually led Salena and I to the track "The Great Shame," which when played live, basically blew my mind into little sheets of metal all over the room at the release show. The song showcases Salena's distinct bass style. A mid-tempo stomp on the drums, "The Great Shame" has the bass taking the lead, cranking through the riff as main guitar with a creepy badass flanged harmonic bantering the end of the line, supported by David's synths. It was one of those moments when I was caught in the sway of the music, as well as standing there trying to figure out how they were making the sound they were making. The track poises itself as proof of Salena's approach to the bass from a guitarist's point of view.

In fact, all three songs pan some gold in as far showing off the challenging aspects Salena discussed in making the music. "Crystal Ribbons" flies into a higher upbeat jest, with Stephen sharply driving all over the place throughout the song, framing David's vocal lines. I've been listening to a lot of New Order lately, so its one frame of reference that I hear in David's voice, reminding me of the best mixtures between Bernard Sumner clear deliveries and Ian Curtis' poetic call-outs. 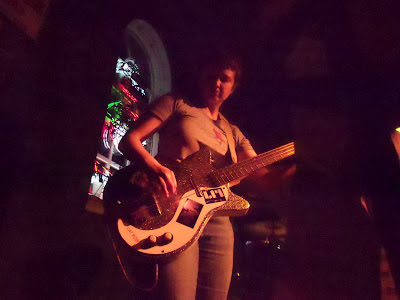 The track that I've found myself addicted to is "Snakeface," the side A instrumental that brings several of the ideas the band strives for into a tangible moment. A bass-led head-bobber that ends each verse with a nimble distorted guitar (or bass?) that then falls into a loud space of chorded heaviness, eventually slowing the tempo down to a semi-dirge, only to rapidly increase in speed and throw-out all the stops into a tightened bayeta of swirling guitars and aggressive drumming. Like any good space rock, it all seems to end in a fuzzed-out explosion of strings and feedback. I swear this is almost a dream-teaming of influences running the gamet into one place; there's the punk and prog, there's "YYZ," is that Man Or Astroman?, oh there's Link Wray popping his head in, too. Brilliant stuff.

Th physicalities of the 45 need to be mentioned, as well, featuring artwork on both sides of the cover by Rene Blansett, and the vinyl is a bleeding mix of colors, too. 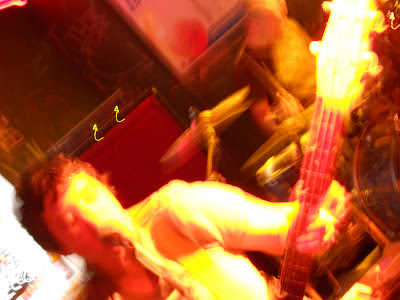 "Madame Machine" is available for purchase online at the Noise Pollution/Madame Machine bandcamp site, as well as at some of the fine record stores here in Louisville.

Upcoming shows for Madame Machine include:
Fri Apr 13 at The Rudyard Kipling with Hellblinki
Sat May 5 at The Bard's Town with Opposable Thumbs and Softcheque