So far, 2012 has kind of blown my mind a little in the amount of independent releases from Louisville-based musicians. Since February it seems like a new seven-inch, full-length, CD, or digital album has been put out with a party to accompany it almost every week. In attempts to log in and document, here are two more. Gosh, I've known Ninnie a long time. Going back to the years we both lived in Lexington, I believe I met her circa 1996ish. We both connected and befriended pretty quickly, and despite traveling to different areas of the US at various points in the last 16 years, here we are now in the River City in 2012.

Ninnie is the pseudonymish moniker used by multi-media performance-visual artist and singer-multi-instrumentalist Cynthia Norton. Born in Athens, Cindy has shown and performed all of over the US, Europe and Asia. Her art reflects the history of women, Kentucky, the rural South, and contemporary culture, blending it all together into a creative homemade vision that access the uses of technology over top the ideas of storytelling through film, created instruments, sculpture and lately, "video-quilts." Some of her latest work has been included in "Young Country" at the Rosenwald Wolf Gallery at the University of Arts in Philadelphia, and in "Contraption: Devices in Art" at the Delaware Center for Contemporary Art in Wilimington, Delaware.

The character and name Ninnie have undergone a plethora of changes since emerging, each reflecting the path and points Cynthia is taking and making at the moment, whether it be Ninnie Nu Ninnie, Ninnie Nuance, Ninnie Naive Nouveau...it all leads to Cynthia's senses of self-discovery and discovery of the world around her, which she reflects in both her performances and the accompanying music, which, for the most part, in my mind, inseparable. Her recordings often tie directly into the themes she is exploring in her visual and performance art, but still stand alone as recordings of some damn interesting and experimental music.

Her musical writing style is definitely off the regular path, and has changed and developed over the years, but has always had one foot in the dirt of country music. Her 2008 album, "Queen of Cups," reflects this the most, in my opinion. That relished in the fresh-water spirit of warbly old-time country and bluegrass complete with a full backing band, even swerving into rockabilly with a cover of Wanda Jackson's "My Big Iron Skillet." Ninnie has always written both beautiful and dark music that I've respected ever since hearing her first recordings on a cassette in her living room back in 1996 in Lexington. Plus, at that first meeting she said something that may have been one of the biggest influences on my own songwriting at the time. While listening to a particularly sad number she commented, "I guess this is what we're supposed to do when we're lonely." Doesn't get much more clear cut than that.


I've been lucky enough, since relocating back to Louisville, to have performed several times with Ninnie, and to hear her music change and restructure. The songs have become more intimate, pulling back from the fuller band sound and jogging into a darker, lower-key centered around her use of an electric dulcimer and her voice. Sometimes she sings through distorted portable amps and or an art piece created from a suitcase and tennis racket. Percussion has come from bizarre objects created by Cynthia, often looped and projected and angled in various renditions and styles, uniting the art and the music even further. There's a noisy element that can be had when all of the homemade instruments and her voice, sometimes looping on top itself, creating an ambience that can be disconcerting and simultaneously introspective and wonderful.

Once while rehearsing for a show at the Alley Theater, I sat back, listening to the sounds she was creating and commented, "Ninnie, it sounds like you've unleashed Patsy Cline into a performance with the Velvet Underground at the Exploding Plastic Inevitable."

The latest album from Ninnie is "Freedom Rings Placed Within," and sees her become even more introspective, concentrating on just her voice and her own creative use of the electric dulcimer. The album was commissioned by the Pennsylvania Academy of Fine Arts (PAFA) for an exhibit of the same name in Philadelphia. The CD accompanies Cindy's first solo museum exhibition of the same name, and through installations, prints and music, according to the PAFA curator Julien Robson, addresses "the historical portrayal of women in art, paternalism and colonialism, and the vernacular forms of folk culture." One of the centerpieces of the show, in my opinion, is a huge homemade dulcimer made from an old wardrobe.

The CD features seven songs that address these themes individually. Ninnie's voice rises in a solo echo above her dulcimer, which is strummed or banged, sometimes slightly distorted, sometimes clean. Each song is its own mood. Her voice ranges from excitable ("Cleaning Up My Misery") to that warbly sadness she can reach into herself and project ("Emma's Song"), to a straight pretty sound that can be the perfect captivation in a quiet room alone, such as the title track. "Freedom Rings Placed Within" seems to access blues and folk as much as the country was present on "Queen of Cups." The album culminates with "Free from Hell," a pounding romp that finds peace somewhere in the distortion.


Tender Mercy - "The Road to Good Intention is Paved with Hell." 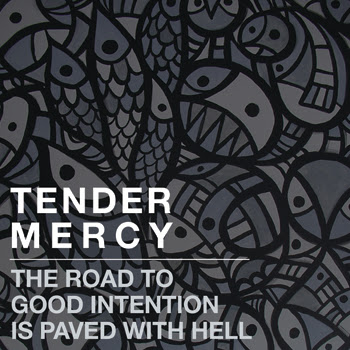 Tender Mercy is the baby of former ear X-tacy employee Mark Kramer. Originally begun in 2008, the project has undergone various line-up changes, all rotating around Mark's songwriting. This debut recording, which was released digitally in November 2011 and live onstage via CD release party in March 2012, is a quiet album that remains close to those songs, featuring Mark's voice and guitar, and the piano of Mike Seymour.

Tender Mercy clings as close to the bone of these songs as can be, keeping the instrumentation sparse. The sounds can seem solemn, led by the soft plucking of a guitar. Mark sings comfortably in a warm voice. Despite being only two instruments and voice, the sound can be a lush, nice moodiness. This is singer-songwriter music as concentrated as it can get.

Most of the tunes are of a slower-tempo, and follow the trail unhurriedly. I definitely appreciate music as stripped down as this; there's no delineation with a tricky bell-mare moment. These are songs presented as songs, clinging to the individuality of the lyrics and melodies. I'm reminded of seeing Mark Kozelek's material performed live with simply two guitars.

Hey, I'm not gonna lie; it's been a rainy Spring day as I've typing up this album, and its been the perfect minimalist soundtrack for it. This a record with a lot of color hidden within its skeleton. "Drive On" is one of the nicest songs I've listened to in a while. Skip over to Never Nervous for this interview with Mark. Skip here to his bandcamp to sample and purchase.