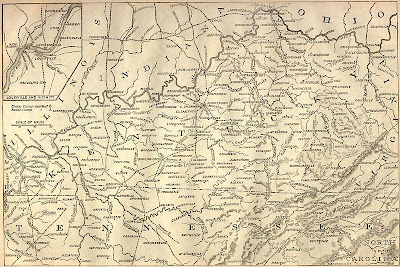 Much like the cover art of this recording, music on "The Vibrant Light" is a scarce collection of crookedly crossed lines of melody representing the moodiness and overall fucked-up nature that is Ole Kentucke. This seven song release is Ma Turner's followup to the 2011 album "My Wheels Are Your Wheels and Your Wheels Are Fire". This time around he is joined by the trio Bonemoss, who add guitar and "backups."

The album is concocted of three cover songs and four originals that join together into a mass of pieces that mesh a journeyed pensiveness with a raid through the unpredictable wandering that is Turner's mind. He expressed to me that "The Vibrant Light" was a response to certain levels of grind that have presented themselves within his life during the last two years. This EP is the result of one of the most interesting and prolific songwriters I know in the area running plainly on a musical purging here. Heart displayed visibly on a cathartic sleeve.

Turner's style can vary considerably from project to project. "The Vibrant Light" can bear relations to times to certain slower and darker moments hidden within his band Cross, it never bellows into the Sabbath-attacks that can populate their recordings. Instead, this EP shares more in common with some of the earlier recordings from Turner's Warmer Milks project, as well as the "My Wheels" album. In fact, "Vibrant" almost serves as a sequel in particular minutes and notes, sharing a similar pruned aesthetic, although in a more minimalistic setting.

"Lost in Heaven" sets the tone as heavily strummed acoustic guitar accompanies Ma's voice that swims in a deep and almost morose reverb, ending in a watery electric solo that leads to a half-chant. Turner breaks Judas Priest's "Heading Out to the Highway" down to a sparse psychedelic acoustic version that sounds like something the metal band would have done if they had recorded the song in 1974 rather than in 1981. Waylon Jennings' "Ride Me to the Highway" is broken into a ballad sung for broken people in a living room at 3am. "Floridian Affair," one of Turner's songs, is an instrumental with both a slow tempoed rhythm line that is eventually panicked by the overlayered lead with quiet spoken lyrics in the background. Television Personalities' "A Picture of Dorian Gray" becomes the prettiest piece, finding some peace in its lyrics. "Christ in a Garden" is a dreamy but disconcerting and drooping perspective on love leading to the close with the darkly frantic bluegrass instrumental "Kentucke Stoic."