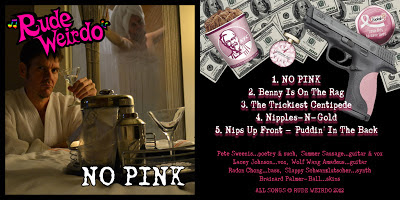 Rude Weirdo is not a band that stays in one place for very long.  I've seem them play punk shows, swing headlong and fearlessly into modern R and B, sidestep into garage, then make-out with synths and change it all up all over again. They have no fear of trends of musical cliques and make themselves unpinned and forward of any categorization. And they bring the insanity cornmeal with their newest EP, "No Pink," released on December 29, 2012.

Formed in 2007 as the mindstray of songwriter/multi-instrumentalist Eric Ronay, the band has released three recordings, including this self-titled seven-inch in 2011 on Noise Pollution, and now this new collection. There is a full-length that was recorded with Louisville drummer Tony Bailey two weeks before he passed away in 2009 called "Barnyard Scratch," but that remains unreleased.

This is dance music with synths and beats exploding out your ass along with some proudly implosive semi-rapping by Ronay as Pete Sweenis. Guitars and electronics and a cabinet of unpredictable instrumentation jump up and around all over this EP. Sweenis asserts how much the ladies love him from the initial title track, a declaration I believe to be truth. The whole album experiments with party music, going into psychedelic frolic-core. This is fun made for straightjacketed pimps.

My favorite track is "The Trickiest Centipede," with Sweenis proclaiming that he is a "lyrical Hercules" over top a buckaroo whoompf bass, leading into a chorus that is fucking amazing: "WOW KISSY KISSY WOW KISSY KISSY WOW KISSY KISSY WOW." This is my new life mantra. When you see me next, flashing my bucks and winking at the girls, I'll explain it to you. There is no part of this album that isn't bombastically awesome. There is a new way to freedom and it is Rude Weirdo.

Email ThisBlogThis!Share to TwitterShare to FacebookShare to Pinterest
Labels: No Pink, Rude Weirdo