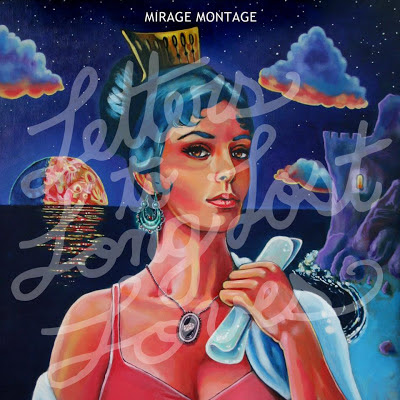 About a month ago, I meandered into a party I was sort of invited to at the last minute. As soon as I stepped through the apartment door around midnight, a seven foot man with a beard, eyeshadow and witch hat sat at the piano to the left of me and started belting out clangy blues/folk tunes that seemed to be rooted in a New Orleans-via-gypsy gospel momentum. He was quickly joined by a chorus of women singing behind him and they serenaded the party apartment with these tunes late into the night. 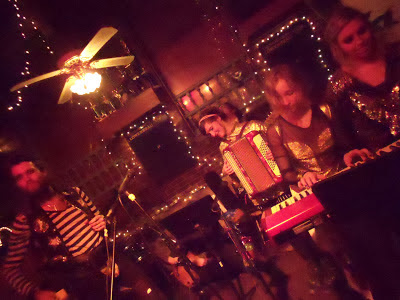 Afterwards, I found out this was Mirage Montage, a band led by the songs of the man on the keys, Noah Church. And this was a rehearsal for their (at the time) upcoming show celebrating Mardi Gras and the release of their debut CD, "Letters to Long Lost Loves." Thankfully, I attended that show on January 18 and grabbed myself a copy of this album.

Besides Noah, Mirage Montage features a group of musicians that are some I know from being formerly involved in other bands, and some who I've only see impressively perform since. Members of what has become my favorite family band in Louisville include percussionist/vocalist Katherine Slaughter (former She Might Bite), singer/accordion and saw player Lucey Guthrie (Reading Group), old time music banjo player/vocalist Heather Summers,  vocalist Sazi Thomas, singer/songwriter Alex Udis, as well as guitarist/bassist/keyboardist/drummer/vocalist Chyppe Crosby, vocalist Rose Bell and fiddler Anna Kripenstaple. 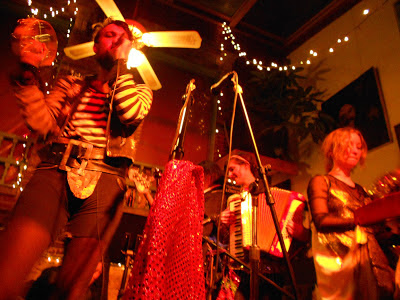 These are songs that contain public acknowledgments of lost love, whether that be through the rigors of snuffed romance or the pruriency for the company of someone lost forever from other circumstances. This album follows a leap through what seems a cycle that may have lasted weeks or a year or a life of joy, grievance over loss, and then the acceptance and triumph of the walls it sometimes takes to scale and live again. The sound ain't in anyway similar, but it reminds of the toll and times described on Willie Nelson's "Phases and Stages." The searching ("Rippin and Runnin"), the meeting ("Lovespell"), the exuberance ("Sugar Poison"), the loss and hurt ("Lady Love," "Lovesick Heartbroke," ), the renewal ("Thru with Blu"). 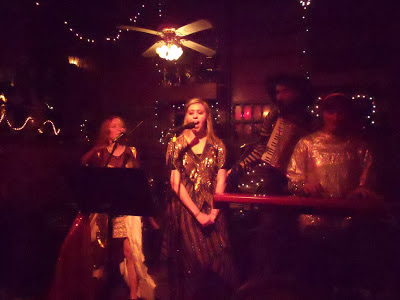 There's a boast of vaudevillian showmanship from Noah's vocal delivery, musicianship and definitely in his live performance. This is bowed with his obvious sincerity in the lyrics and presentation of the arrangements and music itself. Noah's vocals sometimes lilt into a piano-based Dead Milkman belting with a heavenly chorus mixed with a little Tim Roth, 60s girl groups, Hedwig, Gordon Gano, Harry Nilsson and Jeff Magnum. Either way, it succumbs to its own original sound.

The heavenly chorus becomes such presence into and of itself so well in songs like "Memory of Now" and "Rippin' and Runnin.'"

There's a certain Tom Waitishness, at least from my perspective, smattered through some of these tracks, in both on the style, instrumentation and lyrics. Heartbreak can be like lead poisoning, and this album displays it in songs like "Lovesick Heartbroke" and "No One's Got a Love Song (For Me and My Man)," which are as close to true poetry as you can get when dealing with unrequited love and heartache. That song takes the cake as one of the best tunes of the year. "Thru with Blu" resides in the same plateau, bragging punkish Violent Femmesion resilience to said heartbreak and then  rises to a such a jolly chorus about losing the blues tonight. 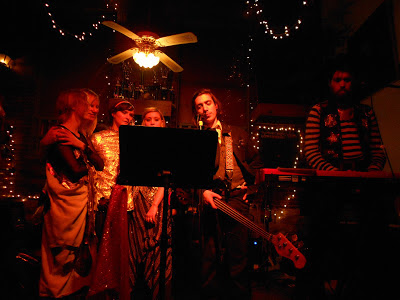 This magic happens the most with the CD and live show closer "Alone with You," a gospel-fed piece featuring performances by each vocalist in turn taking the concept of the love that exists in even in its own absence. The fiddle of Kripenstaple carries the end chorus through the skinned woebegone battlefront of hurt into some semblance of the crash that says "it's ok."

Available at Underground Sounds in Louisville.