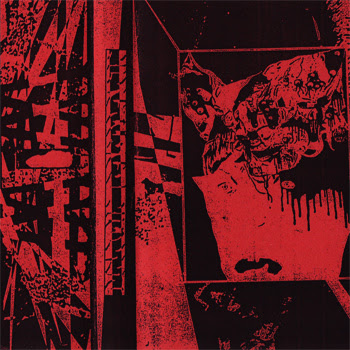 I'm chained to the floor. I remember being a raw-looking dusklover, hanging my head in the sun, watching it fall. Now it's all gone. All the light. All of it. I only feel trapped in the dark, Frightened. Something keeps trying to talk to me beyond the tribal drums, but I can't understand what they say. I can't tell if it's because my ears are shattered and killed, or if it's because they can't speak without their voice become a wail of slowed angry distortion. At this point, I don't care anymore. Wretched Worst has already desecrated me in the past. It's happening again. I'm not desensitized to it; I just don't fight.

Eventually they stop their tease and attack. I'm detached, allow the shit to just happen. The bombardment is flailing discourse of drums, bass, guitar, voice, landed in puddles of noised barrages. You can only really take it and keep taking. It started with a slither and inorganically tongued past deep red inks and paints spilled on the floor to ultimately flop into an elemental prick that pushes and forces up and through your skin until it's ripped and torn.

The title track doesn't take you into any happier places. A sallow distant dying animalistic moan surrounded by cursory static winds is eventually permeated by a pounding hammerfist death rattle. This is filled with a growing warm swamp of electronic anxiety that builds until...is that the return of the voice? Surrounding you, threatening you, growling saliva and guts on your shoulder? But you can't struggle with that whispered shout in your ear, shaking your brainwaves until they crumble down your spine like terrified soot. You can't run. You're too scared. Fuck it. Just end it all, please. This is distressed ghastliness.

I love this band. Please play in Louisville soon.

Dog Shit Deserver was released in 2010. It has been re-released this month by Nurse Etiquette.
Posted by Brian Manley at 6:55 PM

Have you considered therapy?