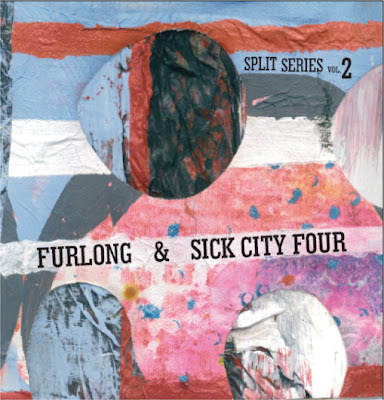 It's a small orange platter dotted with green smudges. Ever since I got it I keep putting it on at various hours of the day or night. I tried it at 6pm once. Tried it at 3am and my upstairs neighbors feet pounded down on my head.

This is the split seven-inch that preserves the sounds of two longtime Louisville groups Sick City Four and Furlong. It has been released by locals Gubbey Records, a label that has been around since 1994 and has released material by The Shit House Poets, The Touched and Rare Treats, as well as several other River City-based bands.

Furlong has been around since at least 2004 and comes from that heartfelt fucked-up lo-fi garage terrorism present in such earlier Louisville punk bands as Shit House Poets and The Touched, which was some of the first live Louisville music I found myself asway in a few years back. The song "Sex Bunker" drives, with the merciless guitar of Dave Rucinski gripping the neck and plunging fast into it along with the buzz of Jim Hall's bass. The vocals are raw and despite being basement rock, the collective plays the tune tightly. This isn't farmed from wads of Nuggets impersonations, but instead preoccupies your next door neighbor's secret cool party; it's fast rock n roll from under the floorboards.

And then there is the Black Sabbath section. I don't mean a dark, slow, mean Iommi riff. I mean that when the band suddenly breaks it down and goes into whittled insanity-land. As the song crescends, the synths hit and smelt you with a bizarre secret lead out that pitches the rest of this description void. And I always love to hear drummer Andy Matter play full-out.

Sick City Four are a hard classification. The band itself features Dan Willems on baritone saxophone, Heather Floyd on trumpet and flugelhorn, Bart Galloway on drums and Chris Willems on guitar. They hail from Bloomington, began circa 1987, and have been relocated in Louisville since 1995. Sick City Four's members have been associated with some of the most creative and influential bands between Bloomington and Louisville, including a couple favorites of mine, The Belgian Waffles and Black Kaspar.

Their contribution is a tune called "Burundi Punchclock." The title makes me think of clocking in at work in one of the world's poorest, most violent countries. I have no degree of knowledge what that would be like, but listening to this record at 3am makes me imagine and wonder. It starts with a muscular rumble of Dan Willems' saxophone. I mean a real rumble that is matted in the guts. From there it erupts into a conflict, trumpet and drums wrangling and squaring-off in tense growlings and brawls. Galloway's drums are an attack; he just becomes a pounding weapon on the percussion, bending time, crushing the snare, doing I don't know what-all at a hyper pace. Heather weaves in and out of the jungle, flailing on the trumpet and flugelhorn, followed by Chris' big guitar, which at first sounds percussive and disconcerting, then rupturing into runs that boggle me. 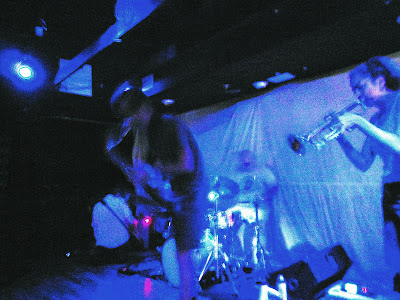 I'm a new fan to this quartet since seeing them fight and defeat a roomful of mentally-challenged basketball fans (are there any other kind?) following a game downtown last year at Harley's. Even though their set was eventually cut short, I feel like they won. They definitely won my attention as one of the more interesting bands in town that breathe no sighs of conformity. It's an aggressive rake of jazz. This record is barbwired sax, drums, trumpet and guitar that doesn't lounge in expected free jazz configurations. It grabs your midcage and rips it up like a root vegetable.

With nicely bizarre artwork by Galloway and a full-color layout by Heather, this is a 45 that needs to be on your record player. Highly recommended.

Both bands will be playing a record release show along with Humongous (also releasing their record, reviewed here) at Quill's on Saturday, Oct 13.