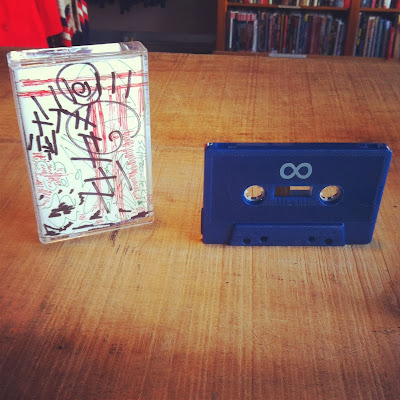 Well, Schizo-Tech is here. And woe to you, Old Earth and Sea.

I've been waiting on this monster since the summer, when I heard first whispers of it. Received an early dubbed cassette copy, which I clung and listened to like a crystal egg in my front yard in the dark at 3am with headphones and beer under a titanic willow tree. There were several sessions like this, accidentally scaring roommates while hiding in the late night, sneaking smokes with a dying 90s Walkman, oblivious to everything accept the oblivion on tape.

Black Kaspar's latest cassette is an invitation to the bewitching giants of Bill Zink's mind, all made reality with the  inclusion of a pedigree that is just as giant in the scopes of experimental music. These roots surrounding Zink come from a musical family tree that run extensive and long, both in magnitude of bands, as well as time. Black Kaspar is a culmination of years borne of members of The Belgian Waffles and Sick City Four, and all three bands of musicians deserve as much as respect devoted to the legends of Borbetomagus, and as much popularity accorded to the revitalization of harsh noise that Hair Police participated in during the earlier 2000s.

The album itself is Zink's commemoration of the layers of sound. He said as much, when I interviewed him in September (see this archived episode of Club El Rancho: The Spooky and Spectacular Sounds of Cropped Out 2013 for a recording of that talk)

"It's sound that I hear in my head," Zink said, "...It's all about sound...It's one of the first times my improv playing has gone back to my heavy metal years....I'll never be at home about rock music unless I can feel it in my body..."

That need to feel a pummeling in your chest is thoroughly examined on Schizo-Tech. The lead-off track "Space-Truckin' Part II" is that layered volume, and is the hypnotic impetus that kept me crouched until far too late in the dark. Beastly electronics, savage guitars, aggressive horns, frantic drums; it's the mammoth descent led by Dan Willems on a Hawkwindish bass guitar riff occurring near the seven minute mark that shifts my mind into my palms and restructures my spine, making everything indeed sound like a helicopter chewing its blades through a freight truck.

The title track is a communication with dimensions Unknown, Unnamed, Feared. A unity of electronics and distortion that I imagine one hears when crossing to the other side after death by electric shock. The last track, "Burrowing," triggers riffs through stratums that lead to dusky places that defy seams.

This Black Kaspar swallows the village of Louisville, as well as the  year of '13 in just these last weeks, pounding out The End for all of us.

Released by Adept Recordings and Loin Seepage. Available at at least Astro Black Records and the bandcamp, if not other fine establishments in Louisville.
Posted by Brian Manley at 2:20 PM