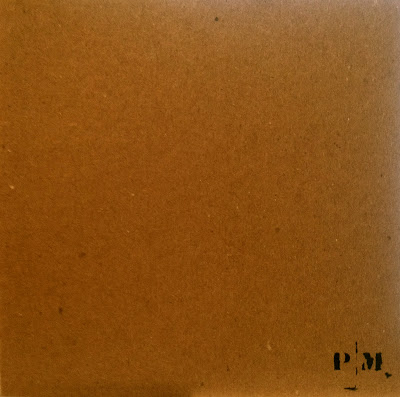 The dishes are not done. Lunch is not made. I get distracted by certain by things in my queue, including this minimalistically-packaged debut from Plastic Melodies, a recently migrated Louisville two-piece that is part of a new bunch of bands that are chopping quickly into the meat of experimental music in this town.

I believe these two are from Bowling Green, but don't quote me. It was whispered in my ear through the spread of talk when I witnessed them for the first time perform at the Rudyard Kipling opening for local crud-punk band Opposable Thumbs back in 2012.

I have an immediate interest in a two-piece; the chemistry that has to exist between the two musicians and the work they need to pull off to fill spaces often punctured and colored by multiple members can be a pressing and magnetic dynamic. Plastic Melodies takes this chore to heart and ups the ante by instead of harkening to the norm of a guitar-drum duo, choosing to confront the chaos with a bass and drum instrumentation. And the spaces are filled fully.

David Lucas slaps, pulls and strums his bass guitar until it turns into a different animal entirely at times. There are nasty distortions and clean pops that encircle each other through his expert use of effects, making the instrument sound like two guitars instead of one, gripping rhythms and leading the songs simultaneously. It's pretty magnificent to watch and hear. His tones double on each other, pounding a hellish punk into the strings. Meanwhile he shrieks and sings, sometimes as though from a tome written by Frank Black, pursing through the creep these songs file into your spine with a throb that is is energetic and driving. 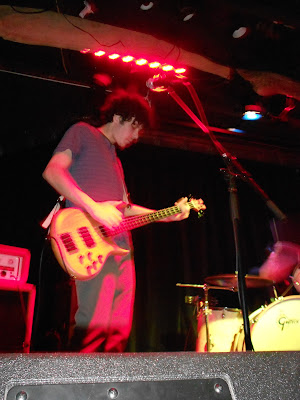 The beat is bound together by Bridget Knight, whom I believe actually has four arms, limbing them around the percussion in an aggressive pound that marries the bass and cracks through the songs, bleeding onto the streets outside the club, quavering the room. These are big drums, and Bridget plies, wheels and rolls around them, blanketing the elbowroom of the music with a heavy quash.

"PM" runs like two bunkies driving a bull-train through any expectations. The album moves quick, each song running under three minutes. It's a loud, fast trail drive that never delivers less than punches. A heavy, Mephistophelean rock record that reads quick and perfect. 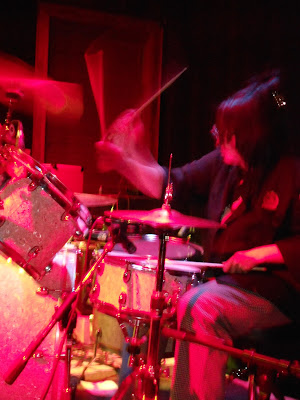 It's heartening to see Louisville being held up by the happening of young bands like Plastic Melodies and The Debauchees. It means only good things are still to come and we are in no danger of things slacking here.
Posted by Brian Manley at 10:09 PM