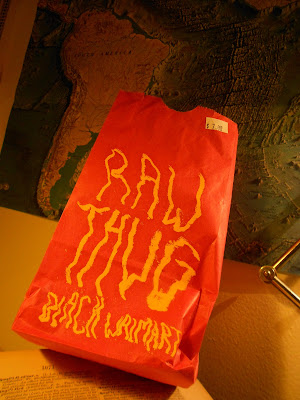 We were knee-deep in bug juice, building smokes, waiting for the train. The cardboard box castle that surrounded us had collapsed. Desperate and cold, I drove a bull prick into the dried calabash we had been worshiping this whole time, hoping the dust would levee our boredom. Then a hand reached out, grabbed my elbow and dragged us through the forest to the house. We drank in quantities and someone yanked the tape player from the broomshed. The moon was hot and bright. My four teeth were on the edge.

From a red paper sack scrawled with the yellow words "Raw Thug Black Walmart," a carefully rolled pair of white tube socks were produced. The oven was kept on bake and the door was open to heat the house. From the carefully rolled pair of white tube socks a cassette was produced. With a sneeze, Mephistopheles pressed PLAY. I wiped my brow off with a shredded roll of toilet paper, stared at a 1960s map of the Atlantic Ocean Floor, and cupped my hands to my ears. A smiling clown was boiling something that smelled of brussel sprouts. 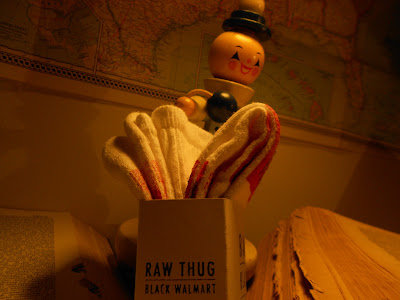 A howl sang from the distance in the woods, whistling on the wind that carried it to us. Ribbits of another instrument crept slowly in, controlling the time. There was this ghostly wail, a saxophone. Eventually the backyard was singing with reversed screaming as a maddening percussive light made everything into a pale swirl of aural characters, most of which I could not identify. Things got quaggy real fast.

Within a breeze at least four to seven miles an hour, a mad Satanic dance erupted that culminated with the chant of an insane electronic owl. Mephistopheles stopped Side One, flipped the copper tape, played Side Two. Wailing horns caught like an animal in orgasm played on in a shifted flash of pinned jazz, casting its bombardment afar. The sounds became a quantic broadcloth that saved us from the ensuing eruptions from the woods. I haven't recovered, yet.

This is Arsenio Zignoto's world; we just try to live in it. 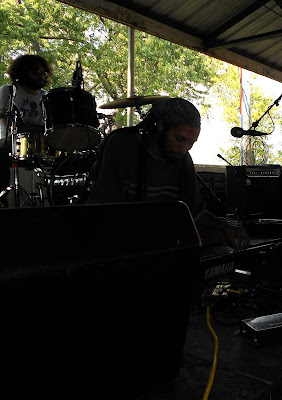