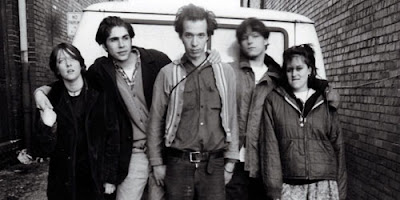 The Louisville Film Society screened two showings of the indie cult film “Half-Cocked” at its Dreamland Theater as part of several memorials that are scheduled to celebrate the life of Louisville musician Jon Cook, who passed away on February 9. Cook’s death, along with the passing of Jason Noble in August 2012, have bereaved this city’s local scene of two musicians that provided an immeasurable amount of influence, support, creativity and wonderful sound over the years.

Both Cook and Noble are among the main characters of “Half-Cocked,” which also features Tara Jane O’Neil, Cynthia Nelson and Jeff Mueller. The film, directed by Suki Hawley and co-written with Michael Galinsky, centers around the lives of these five young people as they struggle to live in Louisville during the early 1990s, crashing at the Rocket House, a real place that has garnered a real legendary status as a music house owned by Cook. Driven by frustration, O’Neil steals her brother’s van and takes the ensemble on a road trip to Tennessee. During the travels they attempt to make money by acting as a band, playing shows with improvised music, fighting poverty and eventually becoming that band, which is basically Rodan.

O’Neil narrates the movie, which supplies black and white imagery of Louisville as a backdrop to the alienation and loneliness that can drive people bonded in their early 20s by shared desires, but who often find themselves wrestling with which directions to direct their talents, hopes, and ideas. It’s a love song for anyone who has ever been cemented by music and art in a “scene,” whatever that might mean, trying to find something in common with the city and society surrounding them. The fact that the cast is composed of actual musicians from the 1990s Louisville music scene who are, in my mind, iconic at this point, makes “Half-Cocked” that much more special. Each member of this cast contributed droves to the music that has come from the River City the past two decades.

I’ve seen “Half-Cocked” once before this showing, but knowing the people involved in the film now makes me view it as though I’m seeing it for the first time. Both Jon and Jason, through the bands Crain and Rodan and other countless endeavors, added not just music to this town, but helped push and direct sound into new directions, and brought just as much personality to the arts scene in Louisville as songs. With them both featured so prominently in this film, and musical contributions aside, seeing them interact, knee-to-knee in one scene, discussing money made from t-shirt sales and door money, you notice their personalities transferred onscreen.  Jon’s frenetic, staring energy meeting Jason’s gawky, supreme kindness.

“Half-Cocked” makes a viewer appreciate the friends you make in your youth, and makes you appreciate those friendships that eventually grow older and eventually exit. Being involved in a tumultuous time period crashing on couches because you don’t know where else to go might be lost on some people. But a lot of those friendships that are founded in those uncomfortable spaces hold true for decades, weathering through all the boring social battles and clique clichés. It takes certain people to immerse in this lifestyle. A line from the film, “there’s something that makes you want to do this,” caught me.


I’m not writing this as a friend of Jon Cook or Jason Noble, which is unfortunate. I’m writing this as a fan of Cook’s music, and Noble’s music. I never got to know them well. But making music in Lexington during this time period, listening to them for 20 years, always feeling connections to the musicians from my hometown, and getting to know many of their friends upon returning to Louisville; I feel that loss heavily. This was a special showing for LFS to undertake and I appreciated it.

This article can also be read at getoutlouisville.com.
Posted by Brian Manley at 8:27 AM