Julie of the Wolves, Create/Destroy 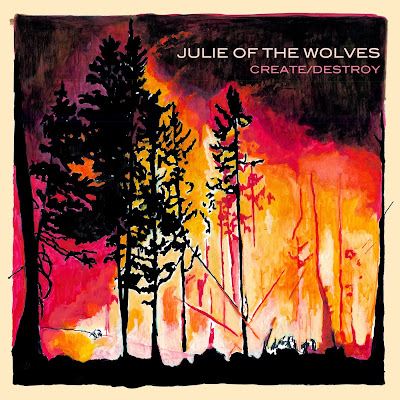 All of these people are back in a new form, and that's a good thing. I fear calling every band that is pursed with established players a "supergroup" because it seems to diminish the origins of the band and its pursuits, and makes it sound like a one-off project. There is a layer of staying power here. The members of Julie of the Wolves have all been in several bands in Louisville, are all well-respected musicians in their various endeavors about town, and all happened to be friends who decided to get together and start an all-female rock band.

JOTW is comprised of vocalist/guitarist Carrie Neumayer (Second Story Man, Early Age), Stephanie Gary (Venus Trap, The Frequent Sea), Salena Filichia (Madame Machine, Venus Trap) and Becca Lindsay (The Red Nails, Minnow). Those are only a partial listing of the bands these people have been in. This lineup has a lot of musical history running through it.

The name of the band comes from the 1972 book by Jean Craighead George, in which the title character must face changes and dangerous challenges forced upon her from culture, the elements and humankind. Like the book, both Neumayer's cover and the means contained within Create/Destroy address conflict and serenity in and amongst the beauties and dangers of existence. These are challenging tunes that do not shy from pushing and pulling simultaneously, a teaming between catchy melodies and a pounding aggression.

The production of these songs, this album, is gigantic, and it brings the listener into these energetic compositions. Hints of Sleater-Kinney, but much more and many other directions combine and oddball each other through a variety of time signatures. The gun-fanned riffs spread through and into the songs, often reacting to each other much like Carrie and Stephanie's voices weave in and out and sometimes on top of each other. Both are strong singers with completely separate sounds and waves of hooking intonation. Becca's drumming is a secure strand that drives the rhythmic vessel here, strong and loud. Filling any cracks, as well as anchoring and driving is Salena's always enterprising bass, which walks, dances, turns and runs through and amid the other instrumentation.

The lead single "The Things They Say" plugs the album well: intelligent and captivating fucking rock. I'm fond of "Youth Wish," with its sludge start that breaks gates into a frenetic fury, washing onto a side-swerve of up-stroked jangle before changing again for the chorus. "S. Y. L. M. F." exemplifies the pound and noise this band can cross through, as well. The title track is another head-nod that slams, and comes armed with a video.

Julie of the Wolves will celebrate the release of Create/Destroy on Friday, November 1, 2013, at Zanzabar. Special guests Twenty First Century Fox will be there, too. The album is being released on Noise Pollution Records.