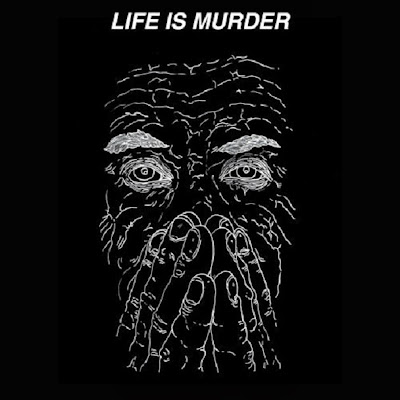 This a heavy record. The vinyl is thick. The words are dark mysticisms pondering porches and brisk-banked rivers and comfortless parking lots and a whole landscape of involved emotion(s). The music is melodic, striving into the Autumns of thought with the words themselves, blending a cold emotion with a warm depression, an occluded front that often leads to a bleeding second chorus that will rip the urine from your heart and the love from your intestines by the overturned drum clanks and fedbacked stringscreams at the end.

I love a lot of Sophomore Lounge's catalog. I don't lie about that. I think this might be nearing the top of the devoted soundheap.

Kal Marks is a trio, not a person. They come from Massachusetts, a state I know little about and realized (while typing this) that I don't actually remember how to spell. I've never heard their music prior to this release, other than what was released on a Cropped Out sampler I listened to a week before that celestial/bestial fest acided my brain away and away. I missed their performance because I was either a) interviewing people for ART-FM; b) eating; c) peeing or...nope, that would be it.

The song Ryan of SL included on Cropped Out was the title track to this album, and it perfectly exemplifies what is contained therein. Vocalist Carl Shane's voice is a gray gulch that is hard to specifically define, striking me somewhere in the ribs as part nasally, part Southernish, part nerdish, part firepit storyteller. It is distinctive, and it immediately catches the ear. The song strums forward with a striding lurch of bass, the guitars swarming, sometimes straight downstrums of accordant and controlled power chords steeped in soldered depressions, until the back-end chorus culminates by recognizing the build of destruction and abyss, all instruments opening into a trough of drive and stringy blame that Dan Hoerner could have penned, with hopes flopping high and descending into declining crescendos and chaosed spirit.

This LP speaks to me. I'm glad there are people making music like this. Fucking angry I missed their performance at the fest.

You can buy online from bandcamp, as well as record stores in Louisville and probably MAsssachusssetss.