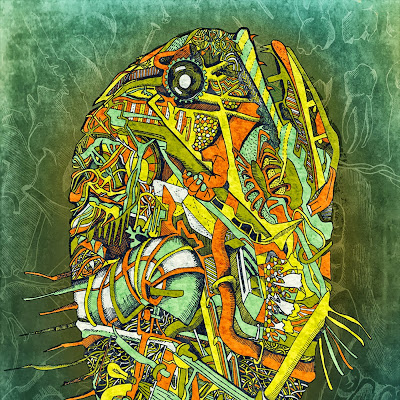 Straight A's have returned after two years. Humility the Hard Way is the band's follow-up to Self-Help and its split with Prideswallower.

Like many of its labelmates on Noise Pollution, including The Teeth, Madame Machine, Julie of the Wolves, and others, to label Straight A's a prole in the post-punk genre is far too generic. There's something in the tea that these bands on NP are drinking, or perhaps it's something in the Louisville air in general, that adds an unpredictable left-turn progressiveness to their music. It's never just punk, just prog, just metal, just new wave. They all make challenging music, acting as obscurants to the genres they all toy with, causing the listener to crane neck, turn up, listen more. The hikes in these rock songs are never predictable, like the discordant chorus in "Wait for It" followed by a harmony that sounds like it was sung backwards.

It's an aggressive avant-punk that dwells here, well-recorded and in your face, with every song offering something different that the preceding one. Fifteen songs that present intelligent and demanding rock that showcases the talent of each musician. There is a lot happening here and it serves the grub pile. A tune like "Alpha Rock," led by its bass guitar and drum interplay, makes you want to dance. The rhythm might be too complicated to find your step, so you just start flailing for release. And that's something found in Humility; a heavy release, filtered through some confrontational gauntlets of sound.

"Stomach Speak" is ghostly with a driving lead riffing you into "Winner," the danciest of all the selections here, until it suddenly noises up and out and gets dark. The experimentation within the second half of "Seance" that bobs into the electro-destructo-distorto of "Wavetek" catches me off guard and it's these moments that are scattered throughout that make me arch an eyebrow and really appreciate all the work these folks are pulling off to make good loud musicks.

Available at the Noise Pollution site, and rekkid stores.