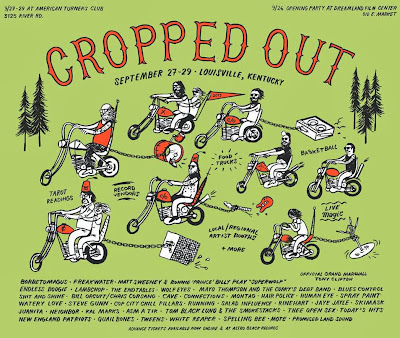 This is just fucking insane.

Cropped Out returns for its fourth year. 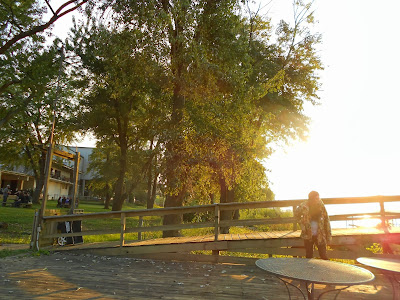 It's one of those moments when you step back and accede that this thing is HERE in LOUISVILLE for real and might stay, untouched, unsullied by bullshit corporate festival fingerings in search of smoothing out and smothering a real music festival that ACTUALLY fucking features real underground music without sponsors and dollar signs. This thing has NOT gotten undermined by some bigger festival organizer. It's still run by two Louisville dudes, and it gets better every year.

Ryan Davis and James Ardery have survived thus far. I've heard say a small business venture usually begins creating profit after five years. These two have the scars and are still living, and in fact, growing. This is a testament to both their vision and determination, as well to the support this city has to offer in supporting live challenging, interesting music. The award needs to go to Cropped Out. 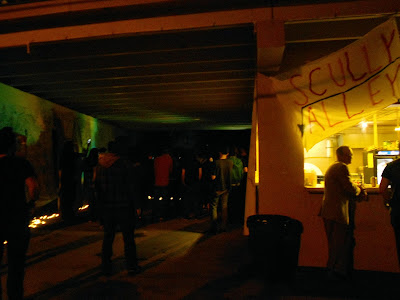 On top of it, American Gloam is two years old. One of the first things I threw myself into covering for this blog was the Ohio River, bands, and Cropped Out, two years ago. After a brief hiatus, glad to be back. Headquarters have moved to the best space Gloam has been housed in, and my break has energized my brain.

So without more avaricious indulgence, I present a preview of Cropped Out 2013. I'm not hitting every band, and in fact, most of what this concentrates on will be local acts that are peppered throughout the fest. As is my want. I live in that. The whole point of Cropped Out is not to suckle on already-knowns...it's to stumble, fatigued and agreeable, into a show of snow-blindy conditions and wonder what the fuck is going on. Discovery. A beautiful thing.

This is a compendium of thoughts, of ideas, of hopes, of dreams of what might happen, what might be heard, what might enter the brain during a set cloaked in darkness of dusk on the backside of white-noised distortion and riverwater breezes. And again, only my standouts when I read the list. And I ain't the sharpest Ohio River blade around, always, anyways.

White Reaper: Kinda new. White Reaper was (along with Blood Planet) one of the first bands I played on my radio show Club El Rancho as a rep of new Louisville rock, and they've since started to get ate up, breaking out of the gates of their own basement. Their seven-inch Conspirator is some heavily goodly fuzzed rock.


Salad Influence: Ah, the projects of Lexington-based Ma Turner continue on and on, thankfully. Turner is a prolific left-turn deity at this point. Cross, Warmer Milks, Pussy Kontrol, Ma Turner solo ventures, and now Salad Influence, his trio with psychedelic marinaded harmonies. I reviewed the debut cassette here (and interviewed him). Also interviewed him on Club El Rancho.


Blues Control: The drippy sound concoctions of the north's Blues Control have not been in Louisville since I saw them wow a room in August 2012.  Unpredictable soundscapes that veer through rationality and into aural spices via electronics, guitar and insect communications.

Juanita: Limbo-ed groovy, loose, jangled garage legends from Louisville, and full disclosure: they're letting me sit in on the guitar for a second time during this show. Birthed circa 1992, Juanita have morphed and shape-shifted over the years more times than your band has ever even played out. Their core female-chorused vocals and hypnotic-plus-spastic melodies and rhythms are mesmerizing, and their on-stage presence is its own party. "Atira a Lobo" forever.

Hair Police: Active since 2001, I saw this band evolve in Lexington from the quirked free-horn assault of Hexose and the insanity-bizarreness of Frankenstein With Knife into the scaled-back tweeks and twonks of experimental-whatever. It seemed like for a few shows these folks were running the gamuts of found experimentation, until suddenly one day they found their claws and became the savage hellion that is Hair Police now. Those were exciting times to hear and see. Undoubtedly, one of the most influential noise/experimental bands in the country, they helped revive and recreate a genre. I mean this is a wall of dissected terror through sound. The last time they played here was with my old band back in 2003ish at some defunct goth club on Main Street, and they were nearly attacked by the crowd. I welcome thee back, Hair Police. Here is a new track/video from them.

The Endtables: What can you say about The Endtables? They were here at ground zero in Louisville for the beginning of the punk scene in 1979. These people started what a lot of the musicians in town are still doing. I don't think they've played a show since the late 80s. If you're looking for the start of that noise/punk sound and that fiendish assault attitude that has existed in this town, it's with these folks.

Asm A Tik: Keeping the awakened notion of mathy prog and its undying, measured oath to punk roots, Asm a Tik are a liner of complicated challenging rhythms and sound structures. Featuring members of bizarro-punkers Straight A's, this band's performance will also be a release show for its debut EP, Master Tape.

Neighbor: Like a nursemaid to a tidal wave of bombastic mutations, this is a machine of punk-noise-metal that seems to only speed up per song. Karpish riffs on 45rpm, their 2013 self-titled album is a capture of two-minute car crashes.

Rinehart: Don't know this band, yet. They are from Louisville, and are releasing a debut seven-inch at the festival. I do dig the melancholic Neil Youngish violin swerve through hillside grasslands that their song spills through on the Cropped Out sampler at their website.

N.E. Patriots: I know nothing about this band, but I love this song. One of their slogans is "Distort it all." Good. They're from New England. Yep.

SKIMASK: They are from the North. They are on tour with N. E. Patriots. Their 12-inch Cute Mutant was released by Sophomore Lounge. They are a Cropped Out shoo-in, sure to aggrieve and nutmeat you. It's an electro-punk assault that is both sexy and covetous, yet so disturbing. Reminds me a bit of early Louisville fuck yous from The Touched. Punk grub to coyote from. With a trash compactor robot.

Montag: Montag reaches into chests and yank hearts out with lyrics and melodies that seem to the basic foundations of our fucking lives. Yeah. Really. You've probably met the man while renting a video or walking down an alley, but he truly is one of the best singer-songwriters in Louisville, and RARELY PLAYS. Like, EVER. And you need to see him. To me, Saturday is worth the price of admission for Montag's performance alone. To me, this is the headliner of the night. Simple, lo-fi, exquisitely written emotions, summations and observations summed into some of the best songs ever made in Louisville or beyond. Backed by Chris Wunderlich, Old Baby's Neal Argabright and Rude Weirdo's Dave Bird.

Jaye Jayle: Evan Patterson wrestles with loneliness and the inner self through his music in both his bands Old Baby and Young Widows. Jaye Jayle, to me, is a more personal confiscation of that mental state. Educating himself in the isolations of travel.

Superwolf: I saw Bonnie Prince Billy and Matt Sweeney perform songs from this tour in Lexington when the album came out in 2005. This will be first time the two have performed it in its entirety. It stands as one of my favorites in the Will Oldham discography. There's the usual solitude found in Oldham's lyrics. Sweeney's guitar adds a different dimension to the gauntness that creates a sweetness in that album that I relish. 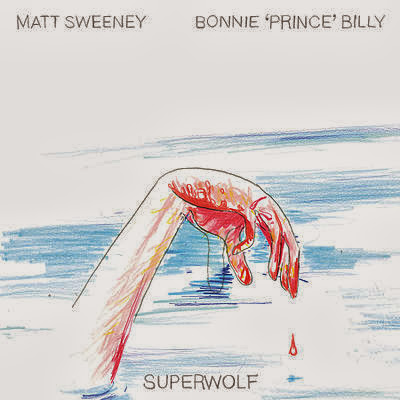 Again, when glancing through the lineup, these are just my personal picks and bands I'm looking forward to the most. The ones I know about. This fest is about aural revelation. There is so much else there. Mayo Thompson. Borbetomagus. Wolf Eyes. Orcutt and Corsano. Endless fuking Boogie.

See my radio show (Club El Rancho) and my interview with Ryan and James for more about the fest. See you on the other side.