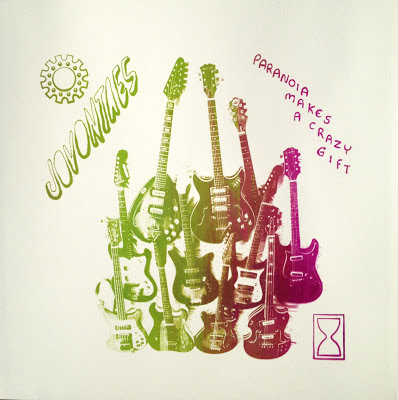 A library of space, a storage unit of magnetic moments, Jovontaes' Paranoia Makes a Crazy Gift is unstraightened garage psych surf that floats in a blank expanse of lo-fi experimentation and willful expansion. There are droney trilling moments, as in "Brewing," that seem to circle your mind, eventually kicking into something more groove and mad tom.

Formed from the 60s psych-garage force that was Tight Leather in 2009, Jovontaes has shifted between poles, anchored mostly by the presence of drummer-vocalist Reid Small. They're sounds change and shift through the sonic pilgrimages sought amongst home-built electronics between both Mark Murray and Josh Blaine (guitar and bass, respectively). When I saw them at Cropped Out in 2011, they seemed to be sowing wild drones that dripped with the grey skies that encompassed them. This recording parks in a maze of vast outer worldly communcations that seemed to have been recorded underneath puddles of audial aeronautics.

Dream-like space-time writhing written in a language somewhere in the backyard of surf-noise continues to survey the drone aspects of sound. "The Bend Before the End" is a William Castle jazz horror movie waiting to be made, being a constant battle between the drippiness of the guitars and the licks of overdrenching firepits cause by the Sun and and it's attack on us all. This is Cosmic Surf; not about exploring Space, rather getting severely Lost in it all. Electronics act as warning bells and reasons to remain in a paranoid aloofness, a distress call on a transistor made through a disconsolating wall of wah.

The entirety of Paranoia Makes a Crazy Gift is a landscape of scoped shots caught in sound. "Hill Top Sex Making" is crouched in a Kentucky woods during a rainstorm, breathing heavy and waiting for the river to quit flooding and the land to stop sliding along with Small's rolls. "Western March" is scrambling the morning after over dunes and through castle ruins in search of madworts and liberty. Or maybe not. Have your own visions. 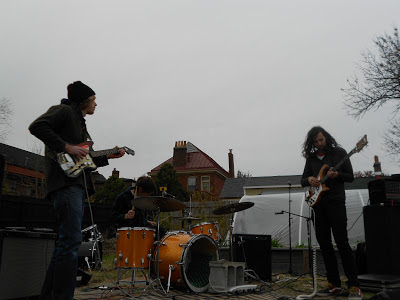 Available through Sophomore Lounge and probably at Astro Black Records.
Posted by Brian Manley at 8:06 AM