Rude Weirdo, "We Are Whores" 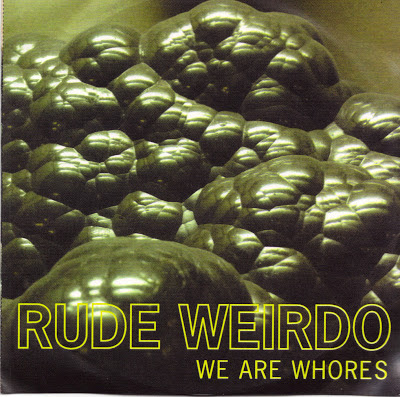 The creative insanity that Rude Weirdo smears over the playing field of a group of dive bar stragglers immersed in swill and debauchery, or even over the shitty stereo speakers as you sit naked at your desk at home, is as rapid-fire and hard to pin as greased shards of lust shot from a righteous, erect machine-pistol. You can stand somewhere in the night and try to comprehend the Orgy of Binge that exists here, but the plain matter is that nothing is Plain. Try listening to it in the abhorred confines of daytime hours and you might sicken and weaken, your cells screaming to escape sunshine and Vitamin D and kids laughing, and return to sticky, dark places and the sounds of whispered grunts.

The album is called We Are Whores, and it's not a pamphlet on the perceptions of the constructions of sexual reputation or indulgence. This is about licking and slutting, metaphysically, physically, mentally, emotionally, and just accepting your goddamn whoreishness. As the title song proceeds to inform, "We are whores, we lick the same tit." Is this a metaphor? Yeah. Is it a stark reality? Yeah. Get over it.

It's both, and it's songs like these that make Rude Weirdo one of the most fun bands to watch and hear, as well as one of the most dangerous bands live. This is because we're dealing with some folks that, put simply, DON'T GIVE A FUCK if they offend you. And if you're offended by them, you probably shouldn't be there.

They give a fuck about the music, and the show. But I haven't been to a rock show in a while where I felt a smell in the air made me think anything could happen, with snap in the mental fingers of the crowd OR the band. The CD release party for this EP was a collage of bizarro dance rock, R and B and no- and new-wavish electronic thrashing; a schizophrenia that mixed with the taunts and heckles from the crowd at the band, and equally from the band at the crowd. There was a loosely-screwed energy that was heaped in palms and flung like piles of gluttony between the audience and performers. Sometimes it was uneasy, most times it was freeze-dried madness as singer Eric (or Adolf Oliver Nipples?) crawled and writhed on the floor through a maze of didgeridoo licks and guitar depravity.

This album is a perfect follow-up to last year's No Pink, itself a collection of pop electro-punk lewdness (one fellow crowd-member told me the story of how he left No Pink with his weed dealer for a week; when he returned to buy more smoke, the dealer described how uncomfortable the EP made him and begged him never to leave anything like that with him again).

We Are Whores cements in a squirted mess that Rude Weirdo are on top of the heap as one of Louisville's most intriguing bands: intricate songs that go unpredictable places. And it's slathered with humor in arched parts of its delivery, which most bands anymore are afraid to do. This is some of the best music, while ditching the oh-so-serious attitude that can afflict most music projects.

I hear the pre-history influences of VRTKM remaining in some of these pieces, especially in the title number and the amazing closer "Hi Death," which blew my mind at the show. There are also some similar what-the-fuck sensibilities of Lexington's Rabby Feeber here. But Rude Weirdo have moved beyond into a brothel and bedroom of its own and are definitely the most clever binging in town. 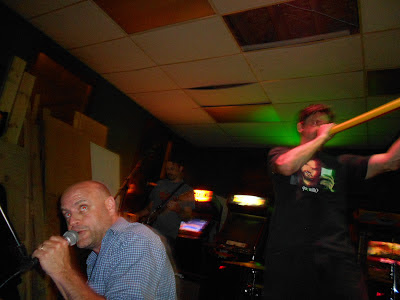 Email ThisBlogThis!Share to TwitterShare to FacebookShare to Pinterest
Labels: Rude Weirdo, We Are Whores