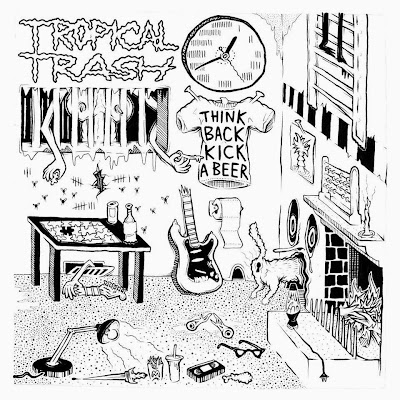 This album was reportedly recorded by Dracula in 2013, so I figure it's good fodder to review this week, what with Halloween coming up.

I don't think Tropical Trash fucks with me with malicious intention, I just think they enjoy easing into my alveary and then turning on the Sunday chicken dinner afterwards. I think we're going to eat Tacos on a Thursday, but they show up with chicken dinner on a Sunday. What am I supposed to do?

Think Back, Kick a Beer is the band's follow-up to Fear of Suffering, and it's a different mouth. The members have altered some. Jordan Richardson has moved from drums to bass. Kirk Mattingly has moved to a farm. Jeff Komara (of Alcohol Party and Sapat) has joined on drums. Jim Marlowe has lost his gawdamned mind. Everybody is getting tans and working out, burning Playboy bunnies into their skins, surfing, eating louder.

I'm kidding. They all live in a haunted house that eats cats through mouths in the walls and pencil-skinny hands come from the basement to grab broken guitar necks. Besides that, I'm not sure if the switches or changes in members really decided the fact that this seven-inch sounds different than the last one, or if it's the fact that Tropical Trash doesn't fuck around with stagnation. I've been to a lot of their shows, and they keep it interesting. It's never the same. And I appreciate the switches.

Where Fear of Suffering ripped open the cadaver of noise-punk and pulled out its organs and just started sprinting headfirst into an occult, Think Back, Kick a Beer gut-hooks the corpse, lubes it with aloe, sets it on fire and sleds it down Satan's inner thigh with a loathing grin. Jordan makes for a fucking sick bass player. Jeff's drums are a dismaying, frenzied, monstrous attack. Jim screams and harrows his guitar faster than ever. And everything is off-balance again, throwing three songs on one side and giving you the epic three minute, 45 second masterpiece that is "Ritual Bath" on side two. This song was made to drive your motorcycle into a 27 car pile-up. Fuck you, Motorhead.You should have tried to write this.

These folks are bound together in a snarl of yells and sonic creases that are good for hurts. Recommended.

Out on Sophomore Lounge Records.