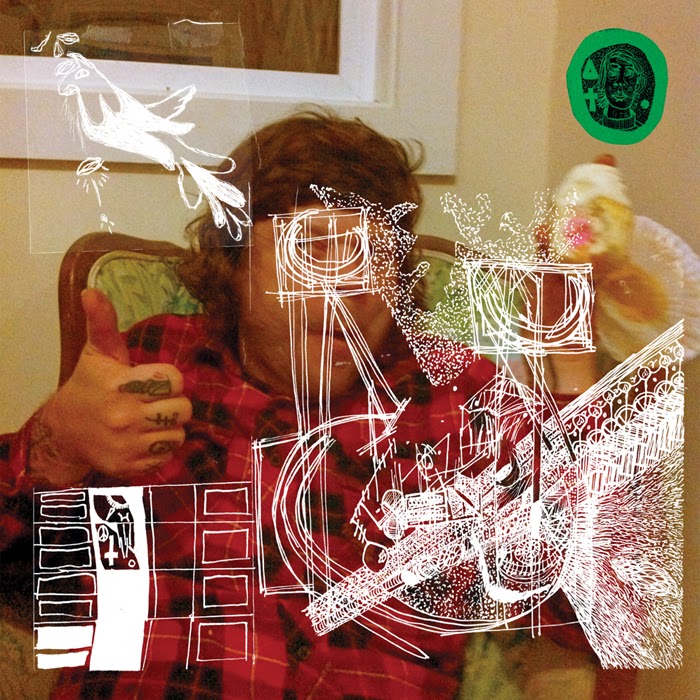 At times we're mottled in a brittle lifing, bound by a daily grindstone that can sink your eyes into dark socket swamps and wear the brain's best parts to useless nubs. Too often, people succumb, see no shoulder, stick to the drill, drained face and drained recognition of the holies surrounding. You just see people crossing the street under hot sun and barely give a fuck enough to think about why the next day might even be real or matter while you wait at the red light. And those people crossing the street; they don't give a fuck, either.

ZOZ is Ma Turner's premiere outing as a soloist (he's also of the bands Warmer Milks, Cross, Salad Influence, The Elephants and many others). He's released a shit ton of solo releases, mind you, most of them digitally. I've reviewed some of his earlier solo recordings here. He released a giant collection of his music called ZOZ COLLECTION which was contained in an artistic twelve-cassette boxed creature. This Sophomore Lounge vinyl LP is a re-working, re-assessing, re-mixing, re-configured packaging of some of those sounds.


The music mustered here represents late night sonic experimentations that can also be included in a Ma Turner spiritual search. Ma has forced himself out from under the grind of the stone, grabbing the remaining meat of his mind and soul, and allowing himself and his art to predominate the blare of the addled, dulling racket that can be American life.

It begins with "Christ in a Garden," an incautious jangled reading reaching for that expanse of peace through chant and mantra, floored by a banged acoustic guitar. From there, the gloves ripped as "Rash Harvest" begins a journey adrift, wherein the mind is adriatic and no longer in control, but instead accepting and filled with the sounds surrounding it.

These are plums immersed in the lack of forethought but instead feeling and perception. Electronics, found noises, low, high, loud, soft, life. Sometimes seamless, sometimes broken transitions bounce between fear and hopelessness and midnight joy, walled by a sway of disjointed, hypnotic soundscapes permeated by breaks in consciousness with a stark banjo that speaks of friendship on a pedestal.

"Rotary" is a preemie reflection into arches, shades and ceremonies that is aided by the crusading trance of repetition found in the words of "For Every Night." "IUGY" is the chaos of real folk set in a David Lynchian tone. Madder. That mysterious background offbeat percussion is madder. Not angry. The other mad.

"Crucifix Cruiser" reminds me of the realizations-through-torment found in Brian Wilson's "Elements Suite," particularly "Mrs. O'Leary's Cow." And as soon as you think you have a grip on this final piece, you are yanked out of Turner's reality and back into yours. So suddenly. So suddenly, in fact, it's refreshing and eye-peeling. Tomorrow is unbarred.