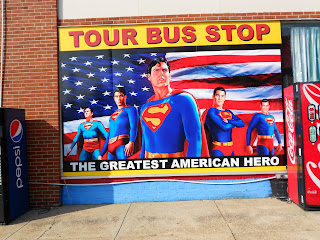 So, I fled the river piracy and State Troopers of Cave-in-Rock. I carried its history heavily.
I headed back North on Route 1, turning left on a little exit taking me West into the Unknown on State Route 146 towards and through Elizabethtown, in Illinois’ Hardin County (oddly, the same county name Kentucky’s E-Town is located in).
The Ohio River would sweep and curl South of me as I followed 146 to eventually dive back toward the river on a straight shot via Route 145 South. My confidence was renewed in mankind as I drove straight down to one of the destinations I had been looking forward to since originally planning this trip. My Soundtrack played on, driving me through Illinois agriculture until I finally found a booming metropolis.
I've obviously had enough drinks tonight to let you know I was rocking Rush during this part of the trip. It's actually great driving music: you should try it.
Well, not quite booming, but still, it was actually Metropolis, the real city.
At the very end of 145, I dove onto US-45 West to head straight onto 5th Street, and cruised into a city that has based its tourism on its comic book counterpart. 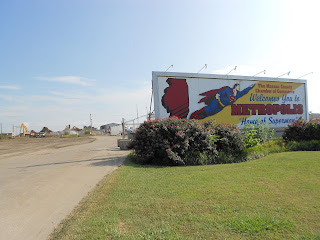 Metropolis boasts a whopping 16,000 residents. It served as a settlement for the Mississippian Cultures, which reached its peak around 1100 CE. Documented history of the town begins in 1757 when the French raised Fort Massac there during the French and Indian War. On his campaign to capture Illinois for the State of Virginia, George Rogers Clark entered the territory in 1778 and won the area away from the British, earning him the nickname “Conqueror of the Old Northwest.” It was on his campaign to capture the Illinois country that Clark basically helped found Louisville, as well. 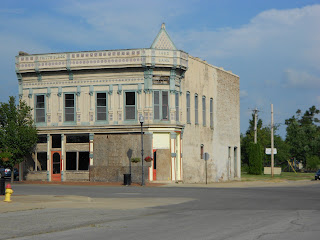 Metropolis was founded by a merchant in 1839, 35 years after the abandonment of Fort Massac, as a hub for transported goods down the Ohio. As the town developed, it eventually served as a training camp for Civil War soldiers.
Then popular culture rang 134 years later.
In 1972, DC Comics declared the town the official “Hometown of Superman,” as did the Illinois State Legislature. And the reason for my visit: the city eventually built its culture around that. 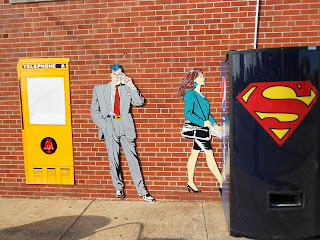 I mean, I was on track to follow the Ohio, but being a comics fan since the 1980s, I couldn’t pass up the opportunity to take in the sites. The city has erected a 15-foot statue of Superman in the town square, followed by a Superman museum. There is a bronze statue of Noel Neill, who played Lois Lane in the early Superman film serials of the 1940s and the television show in the 1950s (Neill also had a career as a WWII pin-up model, ranking second to Betty Grable in popularity, and was signed as a singer by Bing Crosby…not too shabby a career. She actually played Lex Luthor’s dying wife in “Superman Returns” in 2006. She visited Metropolis at some point in the 2000s).
Metropolis renamed its newspaper the Metropolis Planet. The original statue built for Superman was in 1986 and was seven feet tall. A city-wide funeral service was held when DC killed the character in 1992, and re-built the taller current statue in 1993. Each June, the city holds an official Superman Celebration, which was founded in 1979 in cahoots with the release of the film by Richard Donner, and usually features guest appearances by people associated with the character, including Brandon Routh (metropolistourism.com). 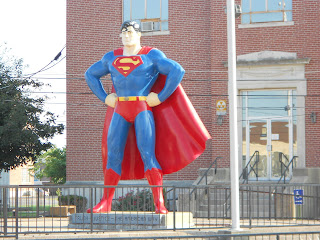 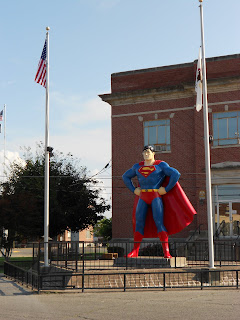 Metropolis is like a little bitty Hollywood with its own Americana Hollywood Museum. 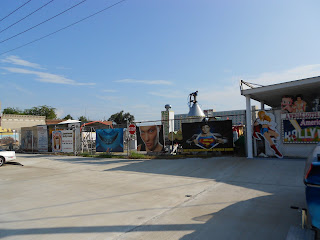 I soaked in the sweat of Superman worship.
Now two seconds here to address comics fans and others. Mind you; I'm not a superhero comics nerd carte blanche. I've never really read Superman comics (although recently I've taken to reading John Byrne's 1980s reboot "Man of Steel" comics). However, my respect goes to the entire creation and industry of superhero comics, because they brought something to the table for generations of kids and adults like myself  who didn't give a shot about sports and needed some people to talk to late at night. Thus, my all-around respect for the birth and at this point longevity and (I hope) immortality of these characters. Superman was the cornerstone of these heroes, and I have always respected that. To me, Superman was also the beginning of superhero films and television, which can be terrible and great, depending on the decade and the producers. But Donner's original "Superman" (that link leads to the trailer...which you should watch) will always be one of those films that sticks in my heart. Superman is a character, despite myself not being an expert, I'll always really love.
I had to note a strange coincidence that didn’t occur to me until later in the night.  In one particular short story I’ve shopped for a while, “Also Southern Tales,” the character of Also finds himself blunted and burned on the deck of his narrowboat, sailing West on the Ohio. Nearly dead, lying on the deck, he slowly resurrects only to hear the sound of the “Love Theme from Superman,” from the 1979 film. As I walked into the Superman gift shop, the owner yelled “Hallo!” at me. 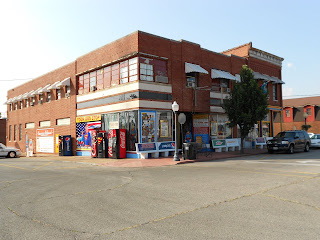 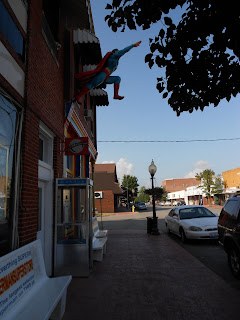 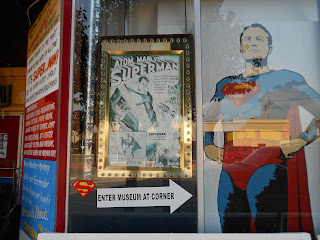 “Are you closed?” I asked.
“No, not til 7.” He then hit a button to play some music in the store while I browsed.
Sure enough, the track was the damned “Love Theme from Superman.”
As I learned later down the road, it’s not necessarily a good idea to follow your characters’ exact paths.
Evening was setting in and I had to decide, standing in the parking lot of a Wendy’s in Downtown Metropolis, whether I wanted to spend the night in the Hometown of Superman, or continue to my final destination on the trip, The End of the Ohio.
I decided to press on. Despite feeling a little worn, I was inspired. I waved goodbye to Clark Kent and headed back onto 5th Street, onto Ferry Street, and finally onto 45 North, toward sights unseen.
I kinda wished Superman had come with me.
Luckily I was armed with my newly purchased “Metropolis, Illinois: Home of Superman” beer coozie.
Next Issue: The End of the Ohio! And finally: Danger in Cairo!!
Posted by Brian Manley at 11:18 PM

Email ThisBlogThis!Share to TwitterShare to FacebookShare to Pinterest
Labels: Superman

Real desi bhabhi fucked by her devar secretly at home

Dirty Indian slut has a casual sex in small room