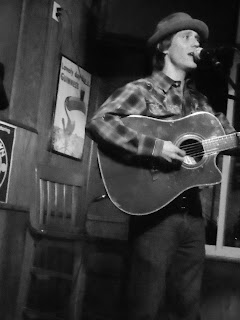 Derrick Wade Manley played at Mulligan’s in Louisville on Thursday, August 11, as part of the Louisville Songwriters Showcase.
Full disclosure here: he’s my brother.
I’ve seen Derrick play seventeen thousand shows, either solo or with his band Eddie and the Fuckmunkys  and The Bottom Sop. And still to this day I believe he’s one of the most under-recognized singer-songwriters in Louisville.
Derrick can write melodies that I can’t understand. They’re vocally catchy and challenging at the same time. Although we both seem to have somewhere in our development leaned towards music, Derrick gained an ability to manipulate lyrical melody I never caught. He has a past soaked in the folk, blues and country tradition that I listen to, but have never been able to access as well as him. While I might head into surf-rock or punk for constant re-inspiration, he seems to jug a vein of Americana that is some of the most honest music I’ve ever heard.  Plus he was blessed with a voice that can follow his rambles to a tee. 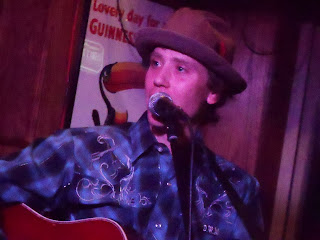 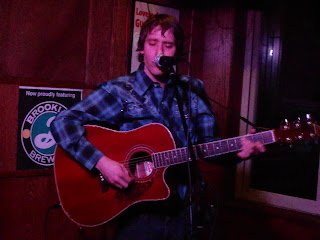 Again, there’s a big bias here, but I’m a fan of his tunes as much as a family member.
Derrick’s songwriting follows the bricks and dirt mantra: heartbreak; drinking; exuberance; loneliness; insanity; camaraderie; relationships; sex and Hell. He covers all subjects. And again, in honesty that others would not approach. “Happier When I’m Drunk” for example. One moment in his shows are raise-your-fists-and-yell moments, followed by give-me-a-shot-of-anything-to-cure-this-wound-with-whiskey moments. He sources Dylan, Waits, Haggard, Jennings, Prine, and a bazillion other artists I can’t even remember on this power outage sort of day. He does what Leroy Carr called the Bobo Stomp live in person. 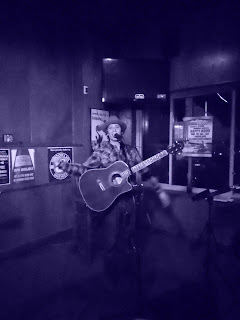 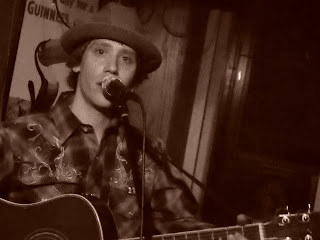 It was a family affair as one of my favorite folks in Louisville, Shawn Blair, joined Derrick on guitar for the show. There were crackles in a cord somewhere, but that was so ignorable during the set because of the music, the crowd was fine to skip past it and just listen. It was a great night. 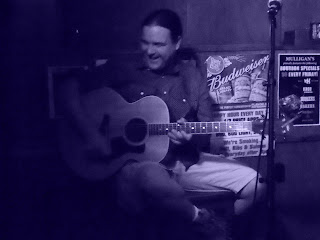 We roamed the bar/grille of Mulligan’s talking about the future, the water main break in Louisville, the Civil War, and hanging with folks from the kitchen who came out to watch him. Nice evening.