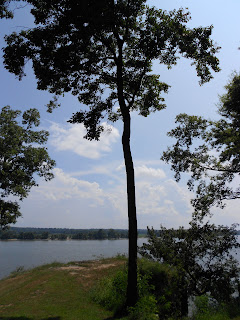 The lazy drift of the Gauteng, its bow gobbling amongst the wake, the setting of the hard sun, the thick wind; all procured Also's thinking for him. His thoughts were serenaded by the requiem sung by the white octopus through the medium of the river, framed by the grove on his left, then his right, then his left, of Sand Island. The goddess cackle of a gosling, or some small water bird, as though imbedded within the throat of a lamb, swept over the ledge of the Gauteng. Her drift had become directionless, settling instead to maintain a circular pattern sweeping before the eyes of the small nonsensical island that rose before them. All of them. All of it. As if it were all.

The wind blew yellow sheets of papers from the deck. Sometimes onto the water, sometimes across the bow.

The papers contained Also's scattered notes of plans and life; works in progress that definitely hardly mattered. Purposes and thoughts that had seemed important once, but now were made for the ocean floor. Or a sufficing river bank. Random words in purple ink and crayon spit over the ship and river. Also scanned the boat and saw the leftover plots, a cabal of paper scraps uniting about his water lodgings. "Flower," "Fish," "Blue," "Smoke," "River," "Mother," "Man," "West," "Dream," "Paddle" and "Death." Letters containing the simple truths, written to deliver to a still existent ancient river, as though to clear his soul of their wrath and power. Carelessly flung fragments of his mind vying for control, wrestling in mud.

The sun set slowly, searing the gondola until the paint seemed to burn to the skin of the craft, and Also's eyes were penetrated and his thoughts silenced  with its destruction. He waited moments before removing his line of sight from the grip of the Sun's charring communication. He stared at the Sun's descent, the Gauteng delaying its redundant motions. The Sun hung and pierced the remoteness of Sand Island, skipping over the knob that lay in its mid-section, cementing the groves with a hanging grumous fire that gorged into compressed spears of bleeding, lashing, perfected, seething, gorgeous, destructive and honed beams that blinded Also's left eye, and severally diminished the sight in his right. Also fell to the deck, unable to sustain his contest with the star, his brain gored and brutalized with an ache and a sweat. His entire frame felt feverish, and the boat slowly broke the stare with a wheeling circle, tending starboard.

A chorus of cells in Also's mind melted, and he swayed under their direction, gripping a sick gored stab within his own human hull. The Sun disappeared behind the grove of Sand Island, and Also, the Gauteng, and the white octopus felt they heard its rattle, leaving the sky light but dim, with the nods of a choking, diseased gosling crying over the island.

There was no breeze to relieve Also's losses, or his burns. His body shook and grimaced from the separated decisions of physical rejections that peeled through his bloodlines, organs, and spine. Something more than sweat seemed to emit from his core; instead, a wretched backlash of pure salt seemed to form on the surface of his skin, amounting to pillars of the mineral. He made slight attempts to wipe this grit from his face, his forearm, but his own touch gave way to sensations of flayed, raw, stripped hide. His fingertips burned from their contact with his forearm, and his forearm became a mucous tissue, the discharged sodium seeping into his snailish remains.

The dusk was ice, and Also Southern's skin gormandized the Ohio River's thicket of breeze. Even the swamp of humidity that swept quietly around his frame sank into the leftover sinew that was Also Southern, soothing the crisped remnants of his limp mind. Darkness was still far, but Also's burnt eyes stayed shut, and he relished in the relaxation of his death on the hull. His exposed muscle and softened being was larva; his thoughts were erased with the settling of the hot winds. The Gauteng turned circles, a whirlwind of momentum making at a pace extremists would deem slight. There was darkness from within his own skull. Skin seemed to replace skin, hiding limbs of muscle and blood. There were no thoughts, but only inclinations to gasp, to absorb oxygen, or at least the oil and smoke that was considered the valley's air. The first attempt was unsuccessful.

A thin layer of cells become another thin layer of cells, and factions of his frame began to regenerate; thinner skin rejuvenated to a second wave of trading and birthing, until a delicate casing of primordial hide bounded and enclosed his shape. The exuded salt lay on the surface still, but there was growth, and attempt, and refinement, and failure, and falling, and receding, and realization, all leading to a simple strained endeavor that existed only for the purpose of trying again.

And with the slow, tedious replenishing of bodily armor, a small gasp of oil and smoke fled into Also's lungs, and it sank deep.

The first realization was Black. Then that gasp of oil and smoke. The Black spun, despite any form or characteristics to mark place or shape. An undisclosed interval progressed, and aspects of the Black bent into shades, then colors that described nothing and had never existed. A purpose seemed ridiculous, and it was, as Also perceived, a time when purposes had not yet had the pleasure of invention. A lazy moment in the history of purposes. The spinning continued for that interval, which he would later decide was only two to three millennia. Also's thought whipped from Nothing, burnt into a white heaven of slumber and lack of reality. Creation was far from occurring, and Also had seen to it that it would be tardy. The rotating Black whipped the Thought and Also receded from that burned lacking, and began to perceive an actuality that could persist some day if only allowed. His first inclination was to ignore it, but the swirling increased in speed, and formed a tunnel that tempted irresistibly. Also wanted his Justice in silence and nonexistence, and made the move with every strain to remove his gaze from those swirling shades. There was that instant, that denial of reality,  that counterrevolution to everything that called, that shedding of instinctual endurance, that refusal to accommodate the Cosmos and to anchor into the absence, the lack of, the little or nothing. The desire to root with destruction and absurd oblivion was his intent. The animal pull of the spinning power that was so insistent was too close, and his sense of curiosity claimed the resolution set in his heart to remain motionless. He whipped his thoughts starboard, an act almost forcibly decided more by the gales of Creation and, in his mind, the irrelevant siphons of survival.

The breaths continued in regular slumps, and with each draw, he was lost. He plummeted immediately into the cyclone, spinning in seconds that saw the birth of the universe, the cataclysmic pound of existence, the labors of Creation, erasing all cravings for cessation he had relished in previously , only seconds, millennia, ago. He seemed to be moving, faster and faster, in a controlled chaos, burning with a swarm of dizziness and understanding of Animal, and the walking Big-Men, and of origins and endings. Centuries were sandwiched with regiments of paradoxes and lies, and ghosts danced and addressed him in slight whispers in his rushed swish back to the growing of the working world and the nearness of matter and newness and senses and some, though not all, lives. There was a lifetime he spent with his grandmother, but she nor he could dawdle, passing in opposite directions. Oranges came to fruition and rotted in his hands, and ice formed about his body, protecting it from scorching droughts and a storm of salt, and he began remembering where he existed in the future, and he was encased in a terrible fear of return, until, with millions of  warnings, he was catapulted through the shell and sprout into earth, out of the shades and swirls and blacks and whites, and into a nauseas fall that lasted nothing. This fall was horizontal, and bent him backwards, and he reclaimed the Gauteng, the valley, the Ohio, the white octopus, and the salted larval frame that was his. The spinning lost its silence and he heard winds, wild voices, and the  harsh, unavoidable and accidental noise of all realities washed over him.

Also's fingers moved, suddenly, and gripped the larboard, and he was monumentally aware, unexpectedly , of his parched throat. Salt rounded his closed eyes, cloaking his ability to open them from the jungle of dried perspiration that pasted them closed.  He celebrated his return with a dry heave and urination in his trousers.

Laying motionless on the deck, near the cabin of the narrowboat, the sounds were difficult to recognize. The swishing of the Gauteng’s hull on the wake. A water bird of the night. A transistor radio from somewhere. It was playing a static form of "The Love Theme from 'Superman'". He did not move. It was sweet.