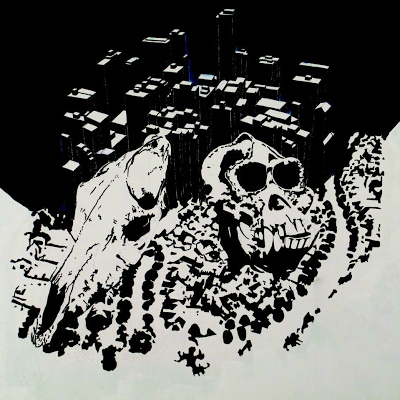 We were funneled onto a blindingly bright Highland Ave, blocked and zoned for Record Store Day. "This band is amazing" my friend spat at me in a hoarse voice. "But I think I'm too high for something this heavy this early in the day."

It isn't that the band is too heavy. It's that the sun is too bright on this cold Spring day, and this a band that should play in dark with fumes, mimes and splayed lights mythologizing them. A picnic band, New Bravado is not.

They had already started. I was a block away and gated a jog to get to the sidewalk in time. After hearing Unconscious Afternoon in my kitchen I got impressed and was intent on witnessing. While Ben Lally's subsequent band Benanthrope blends twists on singer-songwriter material, New Bravado is a pan into fuzzed psych-rock with no inhibitions to that end. 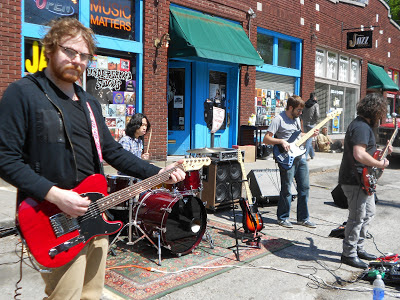 Coffee, short breath, gangrened eyes from the foisted Great Glarer above, and New Bravado is playing at something like noon and oh shit who just handed me beer and wine and the band splays a sidewalk, bending into a space groove. Did we just huff some black ice car air fresheners?

Unconscious Afternoon, New Bravado's debut EP, eats the living flesh and spirit that is Hawkwind, Sabbath, Blue Mountain Eagle, and the 60s/70s fuzz-psych galley. "Death Wobble" mumble sideways with Ben's sweeping vocals, cinch-ringed to a saddle of heavy rock, but sputs any frills and just power chords Thunder and Roses-style into a neurine groove that isn't pretentious, ironic or knuckled. "Nobody Saw Nothin'" isn't a reference to but just sits and stirs in some cosmic shit. The opening wriggle of flange and toms that is the title track eventually lashes to an exotic crease before securing itself to a chorus that makes the drive of the song corrugate with a blend of psychedelia, doomish rock and biker speed that you forgot where you started. 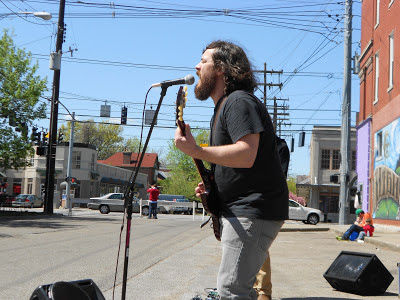 New Bravado has gotten into the same wind that local favorites Old Baby are kiting, and deserve as much attention. A show between the two would be magnificent; I think their muses interact somewhere in the atmosphere.

New Bravado will play their EP release party at Zazoo's on Friday May 10 with special guests Adventure, The Screaming Hand, and Ancient Warfare.

me: So, when did New Bravado start, how, who came up with the idea, what was the motivation, what was the original intent of the sounds, has it changed?

bEN:  Our bass player Adam Copelin did all of the tracking, editing, mixing, and mastering. The tracking we did over at my house, or "Veggie Beef Stewdio" as I sometimes call it.
I was wanting to do something a little more rock focused than Benanthrope; write for and play out in another outfit that wasn't going to sound the same; something that would allow me to get different ideas out of my skull -the louder, more guitar heavy, rockin' ones especially. I gathered up my tunes like that and called some homies. Adam Copelin, Jason Walker, Colin Kellogg, and I started playing music in late Spring last year as The New Bravados.

Originally, as a base, the songs felt early garage, early psych, early metal, and early punk (Sonics, Stooges, Velvets, Black Sabbath, Zepplin, early Stones, early Floyd) without going specifically in one direction, but starting in a good place. Structurally those first songs we still play haven't changed a bunch, but after practicing every week for a few months, and playing shows they became more bright, thick, nasty and modern. They've been a great proving ground to help us realize our sounds and where we can take them.
Two out of six songs on our debut record were completely written together as a whole band; tracks 1 and 4. And, all of the first ones sound a lot cooler now than they did before everyone sprinkled their magic on them. We've all come together and shared in the process of the songs' evolution and their recording. With a little help from our friends as well. Most notably the invaluable help of Ezra Kellerman on artwork.

That's what I love about this band and where I think it's going: there's an organic, collective creativity and comradery. Everyone brings alot to the table and plays their hearts out. You can hear that on the record, engineering and all. We're working on more tunes now and I'm excited to see where our process will take us.