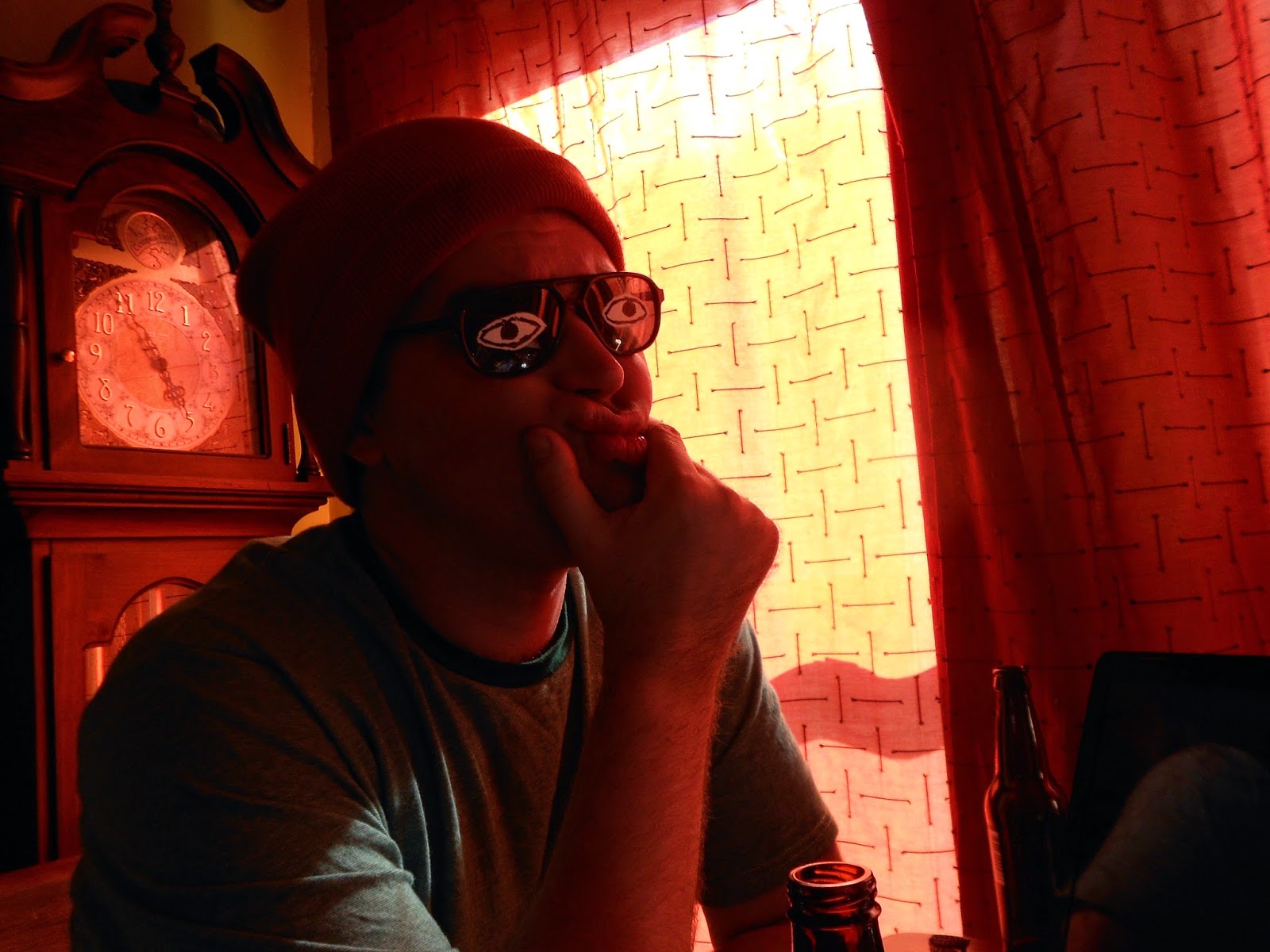 Part three of our ongoing series of not understanding much of anything while consuming alcohol and looking at acts under the Forecastle Festival banner. What kind of world is this? M Dodds and I continue into the night. We're trying to mulch sense of it for you, as a pure and simple service. Simple is the main term here. If you feel the need to catch up: Part one is here. Part two is here.

Benjamin Booker
MD: “It’s a dude. With a blue jean shirt on, and an acoustic guitar… ‘Benjamin Booker is a young New Orleans based singer/songwriter, influenced by The Gun Club, Blind Willie Johnson, and T-Rex. He is currently signed to ATO records’ That’s it. No songs, no tweets… based on that, I’m already saying yes.”
[We begin playing the video accompanying the description]

MD: “Alright, I’m gonna say yeah… and I feel like any time of day would be alright for this.”
BM: “I think eating Hardees is making me gain weight.”
MD: “It’s not making you lose weight. The [expletive deleted] bag says ‘Eat Like You Mean It.” Hardees is not playing around with their advertising….. alright look, the bottom line with Benjamin Booker is that that guy kind of rules. I would definitely go see that guy.”

MD: “As a person who draws things with a black marker on white paper, it [would be] hard for me to hate this.”
BM:  “Perhaps they’ll have some art as part of their show.”
MD: “Good luck man, I’m sure Smirnov Vodka or whatever is gonna have first call on that….but let’s see, Young and Sick, I’m not gonna say don’t not go see those guys, I thought this was alright. I would definitely stand around and watch this band, I think.”
BM: “Alright, Young and Sick goes in the ‘Good’ pile.”
MD: “It goes in the ‘Stand Around and Watch Pile’.”
BM: “‘Stand Around and Watch Pile,’ I got it.”

The Districts
MD: “We get to scroll up [the list of bands on the screen]"
BM: “Maybe the font’ll get bigger.”
MD: “Nope.”
MD: “Alright, we’ve gotta blaze through some of these. We’ve got a long ass way to go. Jesus Christ! How many bands are playing at this thing?”
BM: “We’re only an hour and 53 minutes into this.”
MD: “Only.”

Hurray For The Riff Raff

MD: “You think it’s just her playing the guitar and singing?”
BM: “It’s very Lilith Fair.”
MD: “Lil-lith fair?”
[The rest of this review consisted of Brian laughing at me trying to pronounce the word “Lilith”. In my defense, if this can be said to be that, I had at this point probably drunk a rather distinguished amount of booze.]

MD: “Foy Vance! I’m not against that name. That doesn’t make any sense at all. Ahhhh… he’s got that silly mustache. What? [Reading from the description] ‘Foy Vance was born in the North Ireland town of Bangor, but his love of traditional music was born in the southern states of America.’ For whose traditional music?  He’s got a video…,”
[We start playing the video associated with Foy Vance]

Willie Watson
MD: [Reading incredulously from his description] “’… in the exploding world of acoustic music?!’” I feel like that… exploding!? What, in bedrooms everywhere? At goddamn Bearno’s Pizzas all over town it’s exploding? Alright look, there’s too many bands… “

Hayes Carll
MD: “Hayes Carll. With two l’s. What does this mean? [From the bio] ‘Wildly literate?’”
[There follows a discussion wherein I recall reading Mutiny on the Bounty for a high school history class, Brian recommends a book called Dark Frigate, and I recommend that you stay home and read books based on nautical history instead of watching a good many of these “assholes with mustaches.” The laptop’s battery almost dies and we have to move to another room where I can plug it in despite it being “dead and defiled”. I then for some reason put on the R.E.M. record “Life’s Rich Pageant”.]

MD: “I don’t hate this. I don’t know that I want to see it live. I would maybe listen to it in my car, or when having sex? You have to put in parentheses ‘makes thrusting motion with pelvis’.”

Waxahatchee
[Listening to a track]
MD: “It’s always weird when people say something is lo-fi, when what they mean is that there are very few instruments, or that it’s just not over produced. I don’t dislike this though. But I have been drinking for like the last 4 hours. Let’s listen to another one.”
[We listen to another one]
MD: “This isn’t really lo-fi sounding.”
BM: “Not to me. One thing I can’t do is pronounce the name of her new album.”
MD: “I feel like I’m on the verge of knowing how to pronounce it.”
BM: “She’s more wildly literate than Hayes Carll.”
MD: “’Wildly Literate.’ What kind of asshole… alright, I’m saying with Waxahatchee, I don’t know why it’s called that, but… [It confusingly transitions to the next band here, but I think we were generally in favor of Waxahatchee. Unfortunately it now appears that perhaps they’re not playing.]

MD: “Boy and… oh it says Bear. I thought it said Pear… ohhh these guys ... you know like I was saying it’s cool when bands don’t take their publicity photo too seriously… but then sometimes you see a band photo where all the guys are white guys where they all kind of have the same chin, except for maybe the bald guy over there, who’s got slightly more stubble than the rest of them…”
BM: “Is that Greg Ward?”
MD: “Man, he is a guy that as far as I know has often had a shaved head, but is so goddamn nice that I can’t  bring him into, I just can’t even involve him in…”
BM” “I’m not criticizing him… he just looks, that guy reminds me of him...”
MD: “If he had different eyeballs. He ain’t got no Gregory Ward eyeballs.”
BM: “This, this here though…”
MD: “I’m not even gonna listen to this”
BM: “I wanna hear it… ‘Milk and Sticks!’”
MD: “Milk and Sticks we do have to listen to.”
BM: “They played at South By Southwest”
MD: “Oh DID they? They played at ‘South-by?’”
[The track plays, we discuss cell phone contracts, and how our spouses know what they’re doing with them but we very much do not]
BM: “It says they recorded it at ‘the spiritual home of AC/DC’.”
MD: “Why? Why would you even say that? Why is that even a thing that you would say?”